Whaaat!!! You gonna implant parasites into my intestine!!!

Infecting a parasite for medical purpose, not removing them from me? If your doctor tells such the parasite treatment, probably, you would think your doctor is crazy. From the beginning of human history until now, parasites have been considered to be harmful creatures for human being. Yes, it is true. Many parasites actually harm human health. However, according to some recent researches, these parasitic species may provide some beneficial effects like suppression of autoimmune diseases to their host, human.


Autoimmune disease is a phenomenon of an inappropriate immune response in which immune cells attack tissues and substances normally present in the body. It may cause to restrict particular organs or tissues in a different place. The symptoms and dysfunctional parts are varied. Nowadays, the medical community considers autoimmunity to be responsible for more than eighty illnesses. Autoimmune diseases are predictably among the ten leading causes of death among women in the US [1]. Diabetes mellitus type 1 is one of such the examples. We do not know exact pathology of the type 1 diabetes, but it is eventually caused by the autoimmune destruction of insulin-secreting beta cells in the pancreas [2]. Interestingly, such autoimmune disease incidence is much higher in well-developed countries like the US and Europe. It is odd because except for genetic related diseases like cancer, the incidence of the most illnesses and diseases are higher in developing countries [3]. Even though medical and science communities are still investigating the reason why, one of popular explanation is “hygiene hypothesis”. 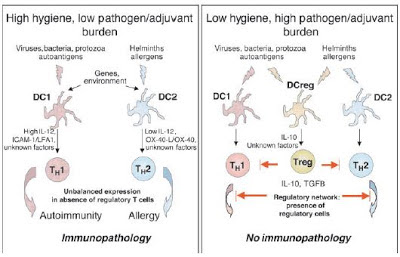 Compared to the medical care in developing countries, well-developed countries like the US and West Europe have better medical care, especially during childhood. Since we are well vaccinated, hygiene, and well cared with antibiotic, we have not had enough chance to expose ourselves to parasites and bacteria, both good and bad. The hypothesis explains that less exposure causes an immature of immune system and they do overreact to conventional food and even one’s own substances and tissues. According to an article in Science (page 490, vol 296), the immaturity is caused by the imbalance between TH1 and TH2(T helper cells). The hypothetical mechanism is that two subtypes of T helper cells have built interaction by the pathogen invasions during childhood and the interaction balances and regulates overgrowth of immune cells. However, good hygiene environment would not give such the chance build the interaction.


According to the National institute of Health, the conventional treatment of autoimmune diseases is limited to simply suppressing patient immune systems or avoiding substances that cause autoimmunity. For example, antihistamine is a drug popularly prescribed for allergic reactions. These drugs are either to block histamine receptors or to inhibit enzyme activities so that the down-stream overreactions of immune system are suppressed. It temporarily mitigates autoimmunity and has side effect such as sleepiness and weaker immune system against pathogens. There are more active treatment like target suppression of gene activity and education immune cell for food allergy. Because of complexity of gene expression and uncertainty of T cell regulation, gene based therapy is still ongoing study. Another possible therapy is an education immune system. It is long process to suppress immune system with antihistamine drugs and inject a small amount of allergic food or substances into bodies under suppression state. Through repeated procedure, the immune system receives the allergic substances as normal [4]. Not only this is a long process, but also it is not applicable to many autoimmune diseases.


And then, what is other alternative treatment? There is one.

By the hygiene hypothesis, less exposure of parasite and pathogens causes autoimmune diseases. If so, how about that we introduce some preys to immune cell to attack? Let me introduce our beautiful old friend, Trichuris suis, as known as whipworm.


Until 1990s, whipworm is treated as just like other nasty parasites like Trematoda. In early 1990s, immunologists found that there is a reverse proportional relationship between the incidences of Crohn’s disease (autoimmune inflammatory colon disease, picture on the right.) and parasites infection. The relationship has drawn a great attention and immunologists looked for the least harmful parasite that lives in the gut. Trichuris suis is an ideal parasite because, unlikely others, this fellow stays calm and does not increase the population in human gut. Even though they suck blood through intestine, colon, it is about 0.005 cc per day [5]. However, human Trichuris lives for about three years, so medical research team implants the pig whipworms, which is a close relative of the human whipworm, sucks less blood and live for about three months [5]. What a cool guy he is!!!


The parasitic worm therapy is very successful. According to an article, “Trichuris suis therapy in Crohn's disease,” test volunteers intake 2500 live T suis ova every three weeks for twenty four weeks. After 4 months, about 75% of volunteers show an improvement of Crohn’s disease and 65% shows fully recovered from the disease by colonoscopy. After 8 months, 72% subjects are fully recovered from the autoimmune disease [6].  Nowadays, the swine whipworm therapy, called Helminthic therapy, has been applied other autoimmune and allergic reaction treatments including celiac disease [7], multiple sclerosis [8], and ulcerative colitis [9]. Moreover, Helminthic therapy has been applied and shows some significant results of food allergic therapy. According to the Journal of Allergy and Clinical Immunology, reintroduction of the Trichuris suis is also effective to reduce food allergic reactions. Conventionally, food allergy is hardly curable. Avoiding allergic food or taking antihistamines are almost only options. However, Bagers research team suggests that Trichuris suis significantly helps to reduce the gluten intolerance while Helminthic therapy [10].


Video footage from the ABC television


Once recognized as a harm and useless parasite, Trichuris is useful to treat autoimmune disease. Helminthic therapy is just a brief opening of new worlds. This species is not just parasitic on the human colon, in fact, it is more likely symbiosis. Helminthic therapy can be only applied to the colonic and ingestion autoimmune diseases but our other old friends may help to treat autoimmune diseases. Human macrobiome, it is also considered as harm and even pathogens. However, according to a recent article "Gut Microbiota, Immunity, and Disease: a Complex Relationship," it is possible that such the small bacteria educate human immune system and optimize it just like hygiene hypothesis. The article shows some evidence that gut microbiome play roles as not only to digest nutrients and protect from foreign pathogens but also educate and optimize immune cells by sterile mice research. Moreover, shockingly, without microbiome, GI tract does not develop properly [11].