An Appeal Against Genetically Modified Organisms: Risks to Crops and Humans

Genetically modified food has been a controversial topic since its first release to the American market in 1994, when the first delayed ripening tomato was put on sale. Even earlier, the Chinese released a strain of tobacco that was virus resistant.1 It didn’t take long for worldwide consumers and governments to succumb to the practicality and ease of cultivation offered by these organisms. Modernly, many farmers are turning to single-strain crops for their growth (most of which are produced by large companies carrying out substantial research), including fruits, vegetables, grains, and even living animals. This makes food production not only more cost efficient, but also faster and more reliable. However, along with the growing popularity and ubiquity of genetically modified foods (GMOs) comes a substantial decrease in biological diversity of commercial plants. This consequence raises many questions that I will address in this blog post.
The first problem with GMOs is the crops’ relationship with other organisms. As an example, bacteria are commonly perceived as “bad” organisms to the layperson, but they actually play a huge role in crop survival by fertilizing the ground around these crops. Plants require nitrogen to make proteins, but they “lack the chemistry set to convert free nitrogen in the air to a form their cells can use.”3 This is where their tiny microbe friends come into play. Many bacteria developed methods to “fix” nitrogen, converting it from gas to forms such as ammonia and nitrate (forms that plants can implement). On the other hand, plants produce copious amounts of carbohydrates as a product of photosynthesis. Thus, plants create a mutually beneficial environment for themselves and bacteria: while the bacteria provide a usable source of nitrogen from the air, the plants provide a stable source of energy (carbohydrates) for the bacteria to continue nitrogen production. This is known as a “symbiotic relationship,” where both parties depend on each other for survival. Another important relationship is between crops and pollinators. According to Caravalheiro, who did a study on honeybees and their ability to coexist within sunflower fields, “higher plant diversity within a farmland is commonly suggested as a measure to benefit pollinators.”5 The study specifically found that the diversity and number of visitors to sunflowers was directly proportional to the seed mass (given 100 randomly selected seeds) as shown in the figure, creating better resources for newly spread seeds to survive and grow.5 The most effective (and perhaps most intuitive) way to increase the biodiversity of visitors to these plants is to create biodiversity of plants themselves; the more strains of sunflower plants and other crops, the higher diversity of mutually beneficial organisms there are in the community, thus not only increases production of plant material (potentially food), but also increasing survivability. The mutual existence, or symbiotic relationship, between plants and other organisms depends heavily on biodiversity. Thus in monocultures of genetically modified crops, where biological diversity is relatively low, the diversity of mutually beneficial organisms is low, thus decreasing production efficiency by many times. 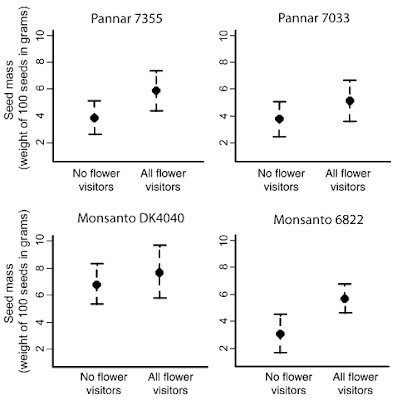 Monocultures of GMOs also have higher susceptibility to disease and infection than diverse fields of crops. Biological diversity plays a huge role in survivability and resistance to invasive or destructive species. For example, if a lethal disease, bacteria, fungus, or virus was introduced into a crop community, it would spread throughout the population and kill many of the plants. However, there may be a few plants that developed some variation in their genome, a mutation (usually in the form of a single nucleotide polymorphism), that make them resistant to this disease. These plants would survive due to their resistant mutation, and would reproduce to create a new community of organisms. The benefit is that nearly the entire population of this new community is now resistant to this disease because they are descendants of the surviving plants. Such progressions in mutations and biodiversity are key to the survivability of all living organisms. However, in communities of genetically modified crops, this is not the case. Entire fields will have little to no variation in their genome, offering no mutations that may be resistant to threatening diseases. A prominent example of this is the banana crop. There is one strain of banana that supplies roughly 95% of the entire banana market worldwide: the Cavendish strain. This strain lacks biological diversity because it is a product of many years of creating resistant genes, and so nearly all fields of bananas are monocultures of this specific species. There is one disease that the Cavendish strain is not resistant to. Panama disease has the potential to kill entire communities of Cavendish bananas and halt much of the worldwide supply. As pictured, this soil fungus enters banana plants through their roots (by way of water), travels into the trunk, and leaves gels and gums that cut off water and nutrient supply from the rest of the plant. This causes the top of the plant to wilt, exposing the rest of the plant to lethal amounts of sunlight. Because all Cavendish plants are genetically identical, evolution of disease resistance is not a valid solution. However, Zhang et al reported that “rotating and intercropping” different strains of bananas helped increase resistance to panama disease. The Fusarium oxysporum (FOC) activity of the panama disease greatly decreased when intercropping was implemented, and it also increased the cropland biodiversity.7

There are many risks associated with the consumption of GMO foods grown in monocultures. While regular fields of plants contain a variety of strains of one plant, offering a multitude of different enzymes, probiotics, and other helpful molecules, monocultures express the exact same amounts of the same genes. Although this can be considered advantageous due to predictability and consistency of expression in crops, it also poses a health threat for many reasons. The first of these is that many GMOs are resistant to herbicides such as Roundup (created by Monsanto), so customers are consuming plants that have been sprayed with profuse amounts of herbicides.2,4 The second of these is gene expression in the crops themselves. Heinemann et al summarized findings of dsRNAs (double-stranded RNA molecules) in GMOs. The effects brought on by dsRNAs is extremely dangerous. Through various mechanisms they block production of proteins that the corresponding mRNA produce. The risk with GMOs is that if a consumer had dsRNA encoding an important human gene, they would undoubtedly be at risk due to inability to create that protein. In a worst case scenario, if the dsRNA corresponded with an essential gene (absolutely needed for survival), the consumer would die.6
While genetically modified food does increase production, survivability, and reliability of crops, it does not pose a sustainable method of maintaining healthy, biologically diverse ecosystems. Not only do coexisting organisms such as bacteria and bees thrive when plant diversity is high, but survivability is also higher in terms of lethal infections such as Panama Disease. Additionally, genetically modified crops can be detrimental to human health. I believe food production should be given as much priority in terms of biological diversity as any other ecosystem on this planet.