The Jackass Penguin (Spheniscus demersus): Major Threats and Conservation Efforts
Introduction
The jackass penguin, Spheniscus demersus, is facing endangerment due to rapid population decline (see photo). This decrease in numbers is largely due to food shortages, oil spills, and habitat disruption (IUCN). Conservation of jackass penguins is important because it is the only species of penguin that breeds in Africa. Additionally, this species serves as both prey and predator, and therefore has a key role in the ecosystem. The purpose of this post is to raise awareness about the major threats to Spensicus demersus and to evaluate the conservation efforts that have been implemented thus far.


The Endangered Jackass Penguin
Spheniscus demersus is a species of medium-sized penguin that is endemic to Southern Africa. It is a marine bird that usually resides in seas within 40km of land, but comes ashore every four months to breed and molt (IUCN). The minimum viable population for jackass penguins was calculated to be more than 40,000 pairs in 2001 (Crawford, 2001). Breeding populations are found in South Africa and Namibia on 25 islands and 4 mainland sites (IUCN).  The number of jackass penguins breeding in South  Africa dropped from 56,00 pairs to about 21,000 pairs in the eight-year span from 2001 to 2009 (Crawford, 2011). Even after including Namibian breeders, the global population of the species is still over 10,000 pairs lower than the minimum population size which classifies the jackass penguin as endangered.
Major Threats
Habitat Disruption
Humans have had a huge negative impact on the jackass penguin. The initial huge decline of the jackass penguin is attributed to major guano collection by humans for use as fertilizer in the 1800s (Roach, 2012). Because the penguins burrow in a built-up layer of guano to make their nests, without this, the birds are forced to nest on the surface where eggs are very susceptible to predation and the elements.
Another major contributor to the decrease of jackass penguins is egg collecting. Since they are considered a delicacy, penguin eggs were harvested by humans for consumption. Worse still, eggs found in nests would be smashed a few days prior to gathering in order to ensure the freshness of the ones taken (Roach, 2012). To give a sense of the extent of the damage this caused, from the 1920s to 1960s almost half of the eggs produced in one main nesting site were harvested (Roach, 2012). Fortunately, this practice was outlawed in 1967.
Further disruption of the jackass penguin’s habitat has been caused by tourism. People can accidentally collapse nests and induce stress in the penguins. Although they don’t pose a major threat, if present in large numbers, tourists can even prevent younger birds from breeding (IUCN).
Food Shortage
Jackass penguins primarily prey on anchovies (Engraulis encrasicolus) and sardines (Sardinops sagax). In order to obtain meals, the birds have to compete for these fish with several predators, such as the fur seal Arctocephalus p. pusillus. This is becoming an even greater challenge for the penguin as the sardine and anchovy populations in their habitat become depleted due to overexploitation by commercial fisheries (Crawford, 2001). Also, it is speculated that the sardine and anchovy populations are lower because they are undergoing a range shift due to climate change (Koenig, R).
The significance of anchovy and sardine populations to the jackass penguin was shown in a 2008 paper by Crawford, et al. In this study, researchers found the relationship between the breeding success of jackass penguins and the combined spawner biomass of these anchovy and sardine species from 1989 to 2004. There is a distinct positive correlation between the abundance of the fish and the number of chicks hatched, implying that a reduction of anchovy and sardine populations due to overfishing will also decrease the fecundity of the jackass penguins. In addition, commercial fishing increases the mortality of the jackass penguin since many birds are caught and killed in fishing nets (IUCN).

Oil Spills
Jackass penguins have been a major victim of oil spills, namely the Apollo Sea spill in 1994 and the Treasure oil spill of the coast of West Africa in 2000 (Wolfaardt, 2008). Getting “oiled" is a potentially fatal condition for the jackass penguins since it disrupts the natural insulating properties of the birds’ specialized feathers. Additionally, the preening of oiled feathers can cause consumption of oil in toxic amounts (Konings, 1997). Despite major rescue efforts to prevent this outcome, about 30,000 individuals died as a result of the Apollo Sea and Treasure spills (Nel and Whittington 2003). The number of casualties is three-fourths of the estimated minimum population size for Speniscus demersus, which demonstrates how severely oil spills impact the viability of the species. This figure is even likely to be an underestimate, since many unhatched penguins left behind by rescued parents were not counted as fatalities. A clip from BBC wildlife show 'African Penguin: Cool Bird in a Hot Spot' that depicts the hardships penguins face due to oil spills can be found here: https://www.youtube.com/watch?v=tsX08folMhY.
Even in the absence of major spills near South Africa, jackass penguins are still found covered in oil (pictured below) due to illegal oil dumping from ships (IUCN). This leaves breeding localities on shores adjacent to shipping ports especially at risk to oil washing ashore.

Conservation Efforts
Counteracting Food Shortage
One way of preventing the depletion of the jackass penguin’s primary food source, anchovies and sardines, is through establishment of Marine Protected Areas (MPA). A recent study has shown that penguins in an area closed to fishing expend less energy searching for fish than those in an unregulated area (CNRS, 2012). Another strategy is to increase regulation of fisheries near South Africa in order to cease overexploitation. Based previous studies, it would be ideal to use these techniques to maintain a combined biomass of anchovy and sardine populations above 4 million tons to ensure decent penguin breeding success (Crawford, 2008).

Preventing Habitat Disruption
In order to prevent further habitat disruption, all jackass penguin breeding localities in South Africa are protected; some are even national parks. In addition, collection of guano and eggs is now prohibited within penguin colonies. An innovative strategy has been implemented on an island resident to jackass penguins in an attempt to reduce egg mortality and the impact of depleted guano. Conservation biologists have put in place fiberglass igloos (pictured) for the birds to use as nesting sites (IUCN). These igloos protect eggs from gulls and other predators when parents are absent, while also
serve as shelter from heat (Orlando Sentinel, 2009).

Rescue and Recovery from Oil
Rehabilitation of jackass penguins affected by oil spills has been fairly successful. Tens of thousands of oiled birds have been captured, cleaned, and reintroduced into their habitat after spills. However, even if they survive contact with oil, 28% of the penguins reintroduced after cleansing are unable to breed (Nel, 2003). Therefore, the most effective preventative strategy seems to be evacuating un-oiled penguins to minimize their risk of becoming contaminated in the first place (Wolfaardt, 2008). 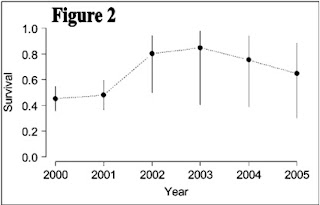 A recent study by Barham et al. measured the viability of reintroduced female chicks that were hand-reared after being orphaned from the Treasure oil spill. Figure 2 shows the annual survival rate from 2000 to 2005 on Robben Island. Researchers predicted that about 135 out of a 1,000 hand-reared female chicks were able to survive to breeding age (Barham, 2008). This study provides promising evidence that hand-rearing chicks can be an effective tool for helping chicks that are orphaned during oil spills or naturally abandoned by their parents.
Operations for rescuing at-risk individuals must be carefully planned since they potentially bring harm to the penguins. For instance, the process of searching for and collecting oiled or abandoned penguins can cause long-term disturbance of colonies and their habitats (Barham, 2008). Also, excessive handling of birds during transport and rehabilitation induces a high level of stress that leads to unnecessary deaths (Konings, 1997). Therefore, it is important to weigh the harm versus help caused by any conservation actions.
Conclusion
The population of the African penguin, Spheniscus demersus, is currently below the estimated minimum viable population size and still declining. The species is endangered largely due to food scarcity, oil contamination, and habitat destruction. It is important to conserve this species because it is beneficial to the ecosystem of South Africa and also to humans through ecotourism. Conservation plans are currently in place to try to reduce and prevent the impact of these three major threats. The potential implications of all conservation actions must be evaluated, since there are cases where they can be more harmful than helpful. It is important to plan for future ways of preserving the African penguins, such as hand-rearing chicks and relocating birds to areas with greater food availability. Preventative measures such as reducing oil spillage and overfishing should also be taken into consideration.
One of the challenges faced by these conservation efforts of the Jackass Penguin is sheer cost. For instance, the entire Apollo Sea penguin rescue operation cost approximately three-hundred thousand US dollars (Wolfaardt, 2008). However, by increasing public awareness through education and media such as this blog post, perhaps enough money can be raised to save Spheniscus demersus from extinction and conserve biodiversity.