When considering methods for preserving the endangered species of the world, it is common to think of the vast tracts of unmarred territory set aside as national parks and wildlife preserves. Establishing large areas as wild lands has been the reflexive method for protecting biodiversity since the creation of Yellowstone National Park in the second half of the 19th Century. However, research is now showing how endangered species are finding refuge outside of the refuges, with urban areas proving surprisingly adept homes for a number of endangered species. A survey of parks in heavily populated areas of Belgium found them to be homes for 40-60% of the region's endangered small animal species, as well as 30% of the area's endangered plants[1]. The Concrete Jungle is proving a far less hostile place than The Specials would have you believe (author's note – outdated song reference http://www.youtube.com/watch?v=b3B4xC4z9yg ).

In thoroughly urbanized regions, the trees found in parks and medians and roundabouts account for a large percentage of the total “forested” area. Even in the continental United States, home to many rural or uninhabited expanses, the trees in urban areas account for approximately 25% of the total canopy[2]. And the planted areas of urban environments have been shown to be more diverse than the surrounding rural areas; parks make safer havens for trees than agricultural or pastoral lands[2]. In rural areas trees like the beech to the right would be chopped down and plowed under to make room in a cornfield, or have its seedlings ravaged by the maws of hungry cows, but in parks they thrive, alongside many other woody and herbaceous plants. And these thriving plants form the basis of a diverse urban ecosystem.

The myriad plants that find refuge in urban areas in turn provide refuge for a plethora of animal life. A survey conducted in the town of Blacknell in the South of England - shaking trees planted in roundabouts and cataloging what fell out – turned up roughly a hundred species of insects belonging to the order Hemiptera, such as the one at right[3]. According to a bit of back-of-the-napkin math and some numbers pulled from Wikipedia, Hemiptera species represent between .5 – 1.3% of total insect species diversity. Assuming that ratio holds at the local level the survey was conducted upon, the trees of Blacknell could host anywhere from 7500 to 20000 species of insects.

Pigeons are probably among the first animals to come to mind when you think of urban creatures. However, dozens more species grace the skies of our cities. In 1886, Augustus G. Paine Jr., an amateur ornithologist with a lot of free time, conducted the first recorded census of bird species present in Central Park, New York City[4]. He counted 235, including year round inhabitants and migrating passers-by. Endangered in many parts of its range, the peregrine falcon - pictured at left – thrives in cities, hunting the omnipresent pigeons. 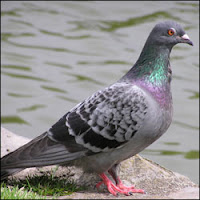 Of course the ability of urban areas to support biodiversity has its limits. The average city park does not have enough territory to support a herd of elephants, and the citizenry would not look kindly upon a tiger making a meal of their pets and smaller children. As such, the animals found in urban areas tend to be small, and possess lifestyles that either benefit from or avoid humans. Ducks get breadcrumbs thrown their way, racoons eat trash, and the myriad insects are all small enough to escape attention so long as they are outside. But large mammals, especially large predators, are largely unwelcome in the concrete jungle. Also, high populations of people lead to high populations of introduced species which can out-compete natives and lead to biotic homogenization. This is especially evident in urban environments and exemplified by the unstoppable, world-conquering pigeon, seen above right. As impactful as the imported rats, mice, and cockroaches are the plants introduced by pe[3].
ople, especially the trees. Native trees support significantly more insect diversity than their introduced counterparts

As humans become more populous, urban areas will become larger and more numerous. And while the lions and tigers and bears will be pushed back onto large, traditional reserves and national parks, it is possible to preserve large portions of a regions biodiversity much closer to home. Smart urban planning and development, focused on including parks flush with endemic trees and plants would foster a diverse urban habitat.
Citations
[1]Cornelis, Johnny, and Martin Hermy. "Biodiversity Relationships in Urban and Suburban Parks in Flanders." Landscape and Urban Planning 69 (2004): 385-401. Accessed Online via KU Leuven.