It begins in early December-- From the waves lapping at the deserted beach shores along the California coast comes a low, ominous bellowing. A hulking dark mass emerges from the water and inchworms up the sand. This is a bull Northern elephant seal (Mirounga angustirostris) coming to stake his claim on this beachfront property. Over the next few weeks, more will join him until this empty real estate is overflowing with thousands of elephant seals—male and female alike—that come to haul out for the pupping and breeding season.

Every winter the entire population of Northern elephant seals—which now numbers well over 100,000—come ashore along the West coast to give birth and mate. This is a short respite from the nine months of the year they spend exclusively at sea foraging. This huge conglomeration also makes them easy targets for exploitation. When observing the biomass of seals present today, it is hard to imagine that not so long ago these animals were so scarce they were thought to be extinct. In the late 1800’s, whales were becoming scarce and hunters turned to elephant seals as a new source of blubber. The slow moving mammals were easy targets, whose massive bodies yielded up 210 gallons of oil1. The population dwindled to roughly 40 individuals, at which time local governments stepped in to intervene. Their recovery was a combination of conservation efforts, discovery of alternative fuel sources, and their coincidental inclination to scarcity by mean of their elusive life at sea. The population is now increasing by 25% annually.

The rebounding of the Northern elephant seal is often labeled as classic conservation success story, but it has not come without its costs. Each animal alive today is descendant from one of the remaining 40 individuals, creating an extreme genetic bottleneck. The effects of this bottleneck are observed in a small but noteworthy portion of the population afflicted with congenital defects. The most common of these defects is hydrocephalus (abnormal accumulation of fluid in the brain) involving the lateral ventricles, various types of cardiac anomalies, and spine curvature (Trupkiewicz, et. al, 1997). A greater threat is the lack of genetic diversity in the population, making them susceptible to total decimation in the event of a species-wide infectious disease. While the species as a whole has recovered from extinction risk, the genetic diversity of the species has been lost and gives us the need to reevaluate what it means to conserve a species and whether biological or genetic diversity is ultimately more important.

It’s no secret that if we want to thrive as a species, we need to protect biological diversity. Ecosystems with greater diversity function better, and the services ecosystems provide us are invaluable in sustaining our lives2. Having a range of different species that interact with the environment in different ways can help stabilize an ecosystem by mitigating negative forces. The susceptibility of an area to colonization by invasive species is also strongly related to the composition of native species there. But what about the diversity within a species? Even if an ecosystem richly diverse in its quantity of species, it is on the verge of collapse if the individual gene pools are homogenous. Even with numbers in the hundreds of thousands like the Northern elephant seal, the lack of genetic diversity is crippling if an infectious disease or other critical stress is introduced.

The history of Northern elephant seal provides us with two important insights into the field of conservation. First, it reminds us that endangered species are not destined to be on a one-way path to extinction. Even members of the 100-heartbeat club (species with less than one hundred individuals remaining) can—and do—recover. Even the most critically endangered individuals are not “lost causes,” rather, they need focused and determined efforts to help them recover. Second, it stresses the importance of genetic diversity in the maintenance of biological diversity. The lack of genetic diversity in Northern elephant seals could be due to the fact that their small population rebounded naturally, as opposed to artificially selecting pairs to avoid inbreeding. In their highly polygynous society, a dominant male can father over 500 offspring in his lifetime, while subordinate males may never get the chance to breed3. Coupled with low population size, genetic diversity can easily be lost.

These two pinniped species faced a similar decline, the same government protections (the Marine Mammal Protection Act, as well as state and federally designated refuges) and similar threats to their present-day livelihoods (ocean trash, climate change, predation), yet their recovery from near-extinction is drastically different. The prolific, but unregulated, breeding
of the Northern elephant seal allowed boosted their population to high numbers, at a cost to genetic diversity. The Hawaiian monk seal is a much more solitary animal that lives in an isolated island habitat and has struggled to rebound.
We can use the outcome of the Northern elephant seals’ near-extinction event to change ways in which we approach species conservation.  The Hawaiian monk seal is in an ideal situation to regulate breeding in wild populations because they are a non-migratory species that inhabits an island community. Researchers with NOAA’s Hawaiian Monk Seal Research Program have a relocation program that moves juvenile monk seals from the Main Hawaiian Islands to the remote Northwest Hawaiian Islands to reduce competition and increase the survivability of young individuals (Baker, et al., 2011). Relocation also serves to mix up the genetic makeup of each island and could lessen the impact of a genetic bottleneck by controlling which animals have access to each other. This is a good species to use as a case study for controlling breeding in wild populations because the island habitat provides natural barriers against gene flow. If you collect genetic information from each seal and know what their heritage is, scientists can relocate individuals least closely related together, then continue to relocate their offspring to islands with different genetic makeup.

Focusing solely on species richness as a measure of biological diversity ignores the qualitative aspects of those species that directly affect their quantitative value. We need to take into account genetic diversity when helping critically endangered species, especially the smaller their existing population. It is no longer enough to protect the number of different species on earth; we need to promote genetic diversity too. Looking forward to the future of conservation, it is necessary to look at protecting not only biological diversity but genetic diversity as well in order to save the remaining species. 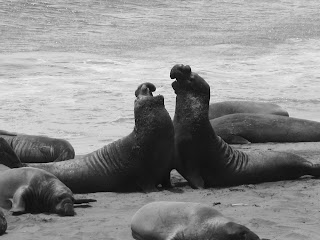