Something for Everyone to Eat


I am a native Oregonian and I have lived the majority of my life in a farming community. Farming was just how my family and I lived. It seemed like a healthy and responsible way to live, and it is. What I didn’t know was the path that mass agriculture has taken from survival to profit, and the opportunities we have today to live more sustainably.

Today we face the problem of food sustainability because of massive population growth(Foley, Solutions for a Cultivated Planet). In attempting to meet the needs of the growing population many resort to methods that increase pollution in the air and in water. We have and always will be seeking new ways and practices that will allow us to better meet the food and energy needs of the world population. However, what may be beneficial now may not be sustainable in the long term. Can we really feed every person on the planet without sacrificing biodiversity?


Current Agriculture
Currently over 4.9 billion hectares of our planet's surface is taken up by pastures and cropland (About 38%!). This number is also constantly rising, about 3% between 1985 and 2005. A study by nature in 2011 also found that “worldwide agriculture has already cleared or converted 70% of the grassland, 50% of the savanna, 45% of the temperate deciduous forest, and 27% of the tropical forest biome” (Solutions). While the amount of land used for agriculture and livestock is rising, the rate of increasing crop production is slowing.
A recent study by Rodrigues et al. compared the alpha and beta diversity as well as production of microbes in the Amazon. They sampled both forest and pasturelands, finding pasturelands to be more ubiquitous in composition and more productive. I question whether the tradeoff between the ecosystem services of the Amazon rain forest for crops is justifiable though.

Recently mass agriculture, the use of large portions of land for the production of food or other commodities in a monoculture, has been the cause of some disturbing problems both in terms of biodiversity and economically. In North America a recent climactic event was the “Dust Bowl” of the 1930s. The Dust Bowl was caused by a severe drought that turned the once productive grasslands of North America into a wasteland of churning soil. The drought dried out the soil and the wind stirred it up into massive clouds, driving people from their homes and off their land. The reason the soil blew away is often attributed to the lack of plant matter to cover the soil and protect it.

An image of the dust clouds seen throughout the ‘Dust Bowl’ (Image found at www.english.illinois.edu).

Much of the land in temperate zones is being reallocated for uses other than agriculture, while areas like the tropics, the poster child for biodiversity, are using more land for pastures and agriculture. The possible consequences of the destruction of ecosystems for human food sustainabilty rivals that of global warming. Some of these consequences include increasing greenhouse gas emissions, the intensification of agriculture, siphoning fresh water from natural resources, the reduction of biodiversity, reducing important ecosystem services and pollution (Foley).
The intensification of agriculture, modifying/managing lands used for farming in a way that increases production, is often achieved through fertilizers, irrigation, pesticides, herbicides, and the use of equipment that allows crops to be harvested and maintained quickly and in large quantities. The use of fertilizer has increased over 500% in the last half century. This along with irrigation use nearly doubling in the same time has caused the pollution and depletion of fresh water and an increase in energy use. An example of agriculture’s devastating effects can be seen if we were to look at the Aral Sea in 1973 and 2013 on Google Earth. 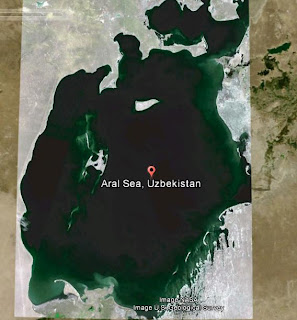 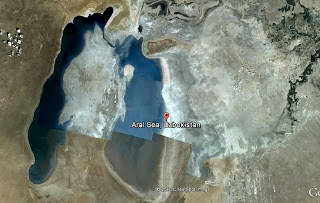 This massive draining of a natural water source was caused by the former Soviet Union’s efforts to divert water for the farming of cotton and other products to be exported (The Other Inconvenient Truth).

Organic farming, an agriculture technique that involves the use of non-chemical or petroleum based products in the management and production of crops, has become vastly more popular. In 2006 it was recorded that over 76 million acres worldwide were organically farmed (Chivian, 395). Nearly 7.5 million and growing in China and South America, and 25 million in Australia are organically farmed. This pales in comparison to the over 12 billion acres farmed worldwide, but there is potential in the progression.

What are the benefits of organic farming? A study that took place across Europe, North America and New Zealand found that biodiversity tended to be higher on organic farms versus their conventional counterparts (398). The study attributed this to three types of practices: the reduction of pesticides and fertilizers that were inorganic, management of noncrop areas such as field margins in a way that provided habitat for wildlife, and the “juxtaposition of arable fields with those supporting livestock” (398). Further benefits included that a greater colonization of roots by mycorrhizae occurred (398). These mycorrhizae improve the health of plants and soil as well as reducing pests/disease, increasing drought resistance and tolerability of heavy metals (398).
Just like conventional farming, organic farm seeks to meet the nutritional needs of a rapidly growing world population. A study from the Rodale Institute compared the yields of soybean crops between conventional and organic fields. The study found that both produced roughly the same yield, but in years of drought, the organically farmed fields produced yields that were up to 40% higher than their conventional counterparts (399). This higher yield in drought years can be directly related to the increased biodiversity of organic farming. Future implications of this study could be seen if applied to recent droughts. One recent drought in Russia, which is one of the global leaders in wheat production, left the world in a scramble for the grain. 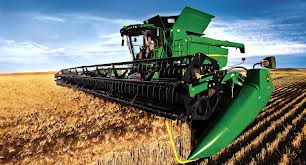 A combine harvester in a wheat field (Image found at www.deere.com).

Other studies in comparing the yields of conventional and organic crops by the University of Essex found that in developing world farms (covering about 74 million acres) crop yields increased by 90% when organic methods were used (399). A study by the University of Michigan compared the yields of 293 foods and found that organic methods produced 30% higher yields on average. Even greater yields were seen in developing countries (399).

We May All Be Able to Eat

Our current farming practices have allowed us to increase our ability to meet the demands of a growing world population, but the ways we are increasing the production of our crops is depleting the Earth of life by reducing biodiversity and destroying valuable ecosystems. Organic farming has been shown to reduce our dependency on petroleum and products that pollute waterways and now may be able to increase food production to feed our planet’s population.
Works Cited