The Answer to Chytridiomycosis in Amphibians: Their Microbiomes!

Picture an amphibian. Do you think of the wonderful diversity of the class? Do you think of their unique colors? Or how about their ability to respire through their skin? When I think of amphibians, I think of all of these things. I also think of their vulnerability to endangerment. Amphibians boast all kinds of cool features, but these features also contribute to their vulnerability. Amphibians are among some of the most vulnerable organisms to extinction for a variety of reasons. Habitat fragmentation and destruction, invasive species, pollutants, and over exploitation are some of the factors that are contributing to the worldwide decline of amphibians (Bernstein and Chivian 205-206). Recently, estimates have projected amphibian numbers to have declined by about one-third (Hussain and Pandit, 2012)! Clearly, many factors play into their decline, but perhaps most concerning is amphibians’ susceptibility to pathogenic infections (Houston et al., 2005).
One pathogenic infection, is a fungal infection called chytridiomycosis, is causing global decline in amphibians (Houston et al., 2005). Chytridiomycosis is a dermal infection caused by the chytrid fungus Batrachochytrium dendrobatidis. The map below shows the prevalence of chytridiomycosis in amphibians. The map marks, with balloons, cases in which amphibians have been found to contain the fungus. As you can see, the infection is found on a global scale. This suggests that B. dendrobatidis can infect almost all amphibians around the world (Hussain and Pandit, 2012). Is there a way to help stop the spread of fatal infections such as chytridiomycosis? What if we could help amphibians mount a defense simply by examining the bacterial communities that live on the surface of their skin? Well this may just be possible!

Photo credit: Fisher et al. (2009), http://amphibiaweb.org/declines/declines.html.
I came across an interesting article while reading an issue of American Scientist. The article detailed the research of Reid Harris, of James Madison University, and Vance Vredenburg, of San Francisco State University. Harris and Vredenburg discovered that a bacterium called Janthinobacterium lividum, which lives on the skin of amphibians located in North America, Central America, and other continents, may combat the chytrid fungus. Laboratory, and field trials, showed that the amphibians inoculated with the J. lividum bacterium produced a substance called violacein which helps neutralize the growth of the chytrid fungus (Burke 190). I don’t know about you, but this sounds like a great option to help reduce amphibian deaths from chytridiomycosis! As you can imagine, there are some problems associated inoculating amphibians with J. lividum. 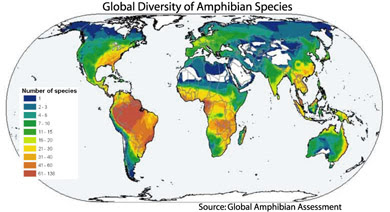 Photo credit: http://amphibiaweb.org/declines/declines.html.
As you can see from the map above, amphibian diversity is vast. Found in almost all countries around the world, and many different ecosystems, how do you choose what species to inoculate? For example, the species of amphibians in the Amazonian Rainforest, around 60-140 species, might not respond to the same inoculations as species found in Madagascar, around 15-30 species. What about the possible negative impacts that inoculating an ecosystem with the J. lividum bacterium might have? What about other probiotics that might have positive effects on other kinds of amphibian based infections (Burke 190-91)? I think it’s critical to keep questions like these in mind lest we exacerbate the problem. Luckily, Harris and Vredenburg have thought about these questions. They propose that ecosystems being inoculated with probiotics must have native species that contain the probiotics in their microbiome. This would in turn help reduce the risk of any ecosystem problems that might arise (Burke 191).
Luckily, many amphibians are able synthesize their own defenses against pathogens. Amphibians have glands that create skin peptides which serve as a natural immunity to these pathogenic bacteria (Houston et al., 2005). So, if amphibians contain natural defenses against peptides, what is the point of inoculating them with other probiotics to assist in defense? Well, the figure below describes this.

The graph above shows a species of amphibian, Xenopus laevis, which was exposed to norepinephrine. The norepinephrine stimulus caused a release of the natural defensive peptides. The y-axis represents the peptide concentration found on X. laevis, and the x-axis represents the days following peptide depletion. As you can see, following exposure to norepinephrine, peptide concentration levels remained low for a period of 3 weeks. This suggests that the amphibians’ natural defense is inhibited after a defensive response to pathogenic bacteria. It takes the amphibians a period of longer than 3 weeks to synthesize enough peptides to again mount a successful defense against possible infections (Houston et al., 2005).
I think that this provides good evidence that the inoculation of amphibians with probiotics is a good idea seeing as how immune defense takes extended periods of time to re-establish itself. Amphibians have a great initial resistance to pathogens, but what about continued exposure? This is why the search continues to find a suitable probiotic to administer to different ecosystems. A recently published paper shows that the family of Plethodontid Salamanders (shown below) of the genus Speleomantis have a natural resistance to the chytrid fungus (Pasmans et al., 2013). 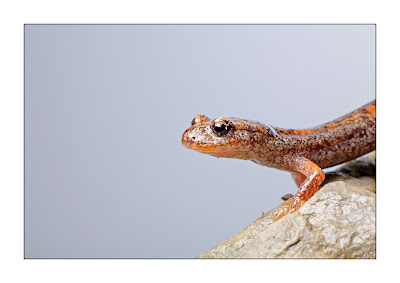 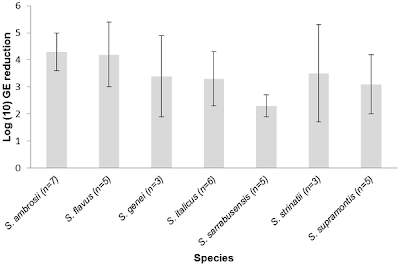 This graph shows the salamanders’ innate ability to kill off the B. dendrobatidis fungus. On the y-axis is reduction of the genomic equivalents (GE) of B. dendrobatidis on a logarithmic scale. The x-axis lists the different species of salamanders from the family Speleomantis that were inoculated with the bacterium (Pasmans et al., 2013). Seeing as none of these salamanders were affected by the chytrid fungus, I think that they may be a viable candidate in which to synthesize a probiotic from.
If the microbiome of these salamanders was further studied, I think it might be possible to isolate the bacterium that can help these salamanders neutralize B. dendrobatidis. This bacterium could then be used in a probiotic solution that can be introduced to some amphibians. Proper precautions would need to be taken in order to insure that there would be no negative effects associated with the inoculation.
This kind of research gives me hope to the future of amphibians. With such large declines, amphibians can use any kind of assistance offered. I believe that by reducing the effects of chytridiomycosis on amphibians, we can begin to focus on other causes of decline like habitat destruction. Now let’s go save those amphibians!

Chytridiomycosis in European Plethodontid Salamanders of the Genus