Taking Down the Monster

Weeds are a nuisance. They crowd out crops and make your yard look neglected. I sure wish there was some chemical that could wipe out weeds, pollute our waterways, and mutate our amphibians. Well folks, there is! Atrazine and Roundup do just that! No more having to deal with looking at those God-awful weeds. Just spray this chemical on them and say goodbye.

In the United States, Atrazine and Roundup are the two most widely used herbicides on crops. Both have adverse effects on amphibians.

A study by biologists at the University of California, Berkeley shows that Atrazine can change the sex of adult frogs and causes their fertility to be as low as ten percent (Sanders 2010). And when a genetically male female (a frog that was born male but mutated to a female) and a male frog mate they can only have male offspring, which can seriously skew sex ratios and decline populations dramatically. There are also studies about Roundup being extremely lethal to amphibians(Sanders 2010). A study published in the journal Ecological Applications shows that Roundup causes a huge decrease in amphibian biodiversity, up to a 70 percent decline. So, you get the picture, Roundup on crops means bad news for amphibians.

John Francis Queeny used to be in the pharmaceutical company but you may recognize him better as the founder of the company Monsanto. Monsanto has come up with genetically modified organisms, GMOs, that are Roundup resistant. They sell the GM seeds to farms that can then grow crops that are not affected by Roundup. The farmers can then spray as much Roundup on their crops as their greedy hearts’ desires.  Any plant that is not specifically what that farmer wants to be growing no longer can compete for space among his/her crops. So now there is only one type of plant in the field. This greatly decreases biodiversity. There are no bugs feeding on the specific plant because the GMOs protect against that. So, there are no birds around that are eating the bugs. Monocultures also deplete the soil of nutrients and the ability to adequately retain water. And the cycle goes on and on.

Now this raises the concern on the effects that GMOs and Roundup have on humans and the environment. There was a study done of the effects of genetically modified corn that was Roundup resistant on rats. Rats were fed this GM corn that was grown with or without Roundup and the results were disturbing. 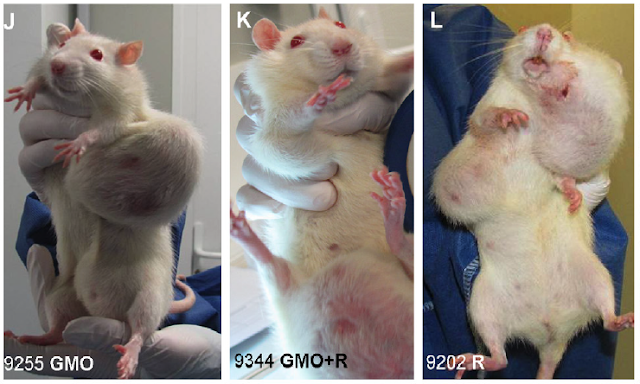 This picture shows that effects on rats that were just fed GM corn, GM corn plus Roundup applied during the production of the corn, and just exposed to Roundup (Seralini et.al 2012).

This picture shows the effect that GM corn had on the kidney. As you can see by the picture of the control, the effects were pretty severe. These studies correspond to the amounts of Roundup that are found on GMOs and in some drinking water (Seralini et.al 2012). I know humans are a lot bigger than rats, but I do not want that poison in my body.

Not only is Monsanto selling GM seeds to farmers, any farm that gets polluted by these patented seeds from a genetically modified plant, Monsanto now owns. They have an ownership over 80 percent of crops already and can basically take land at their will. An article by Carey Gillam from the Huffington Post stated that Monsanto has filed 144 patent-infringement lawsuits against farmers. This may not even be the worse part, GMOs do not have to be labeled or marked. So you have no idea what you are eating! That does not seem right. There are nutrition facts on everything, even water bottles. So we get to know that our water is actually water (thank goodness) but we do not get to know whether the food we are eating is contributing to pollution of that water. I just do not get it.

Recently there was GM wheat found growing on a wheat farm in Oregon. GM wheat was tested back in 2005 and never got approved by the FDA. What is it doing growing in Oregon 8 years later? Where else could GMOs be that we are unaware of? Of course Monsanto has no idea how or why it is growing there. Here’s a short clip from the Colbert Report about the issue.

There is a lot that is unknown about GM crops. They undoubtedly have long-term affects. A study done by Anthony Conner at al. is afraid that gm crops could lead to “superpests” or “superdiseases” through the adaption of resistance mechanisms (Conner et al. 2003). They also are looking into more specific biodiversity effects of GMOs and the way that GMOs affects the purity of other crops.

It is time that we come together and fight for our rights. A protest has been started against Monsanto and there was the ‘March Against Monsanto’ that occurred on May 25, 2013 in 52 countries and 436 cities (Warren M. 2013). The first step is getting every state on board with labeling GM products. People have the right to decide what he or she put in their own bodies. It should be a choice to buy GMOs, not a guessing game. Here is a link to a site that has a list of most of the companies that use Monsanto products. http://fracturedparadigm.com/2013/04/02/boycott-monsanto-a-simple-list-of-companies-to-avoid/

If people stop buying these products then Monsanto will have no choice but to change their ways. We no longer have to contribute to biodiversity loss, water and soil pollution, and poisoning our bodies. Together we have the power. Look at this list and decide what you can give up or substitute with a similar product from a better company. Every little bit helps. Let’s take Monsanto down!! Who’s with me?