The Importance of a Stable Salmon Population in the Pacific Northwest

The Importance of a Stable Salmon Population in the Pacific Northwest 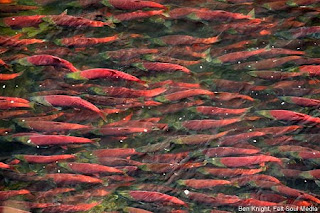 While there are several different species of pacific salmon, they all hatch in fresh water streams and rivers, migrate to the oceans where they grow large due to the large amount of available food, then return to their birthplace to spawn.  Most of the salmon species die almost immediately after spawning, and their carcasses decay and flood the rivers and streams with nutrients.  In many rivers where this occurs, this nutrient cycle is a very important aspect of the watershed, and variances in the salmon population can strongly influence the river’s health.  It is estimated that only 5%-7% of the historical salmon runs are reaching their spawning grounds (Barnard, 1).  This means that only 5%-7% of the historical nutrient flood is being introduced into Pacific Northwest watersheds each year, but what effect does this really have? 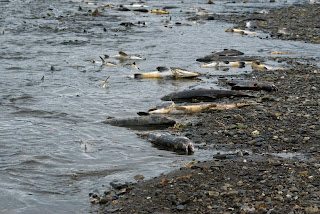 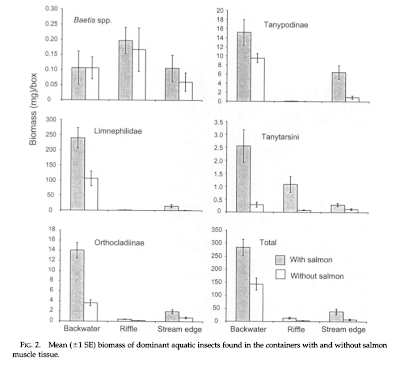 More than 95% of the mass of pacific salmon is gained in a marine environment (Naiman et al., 400), and as the salmon migrate from the ocean back to their spawning grounds, they rarely feed, which means that the nutrients that salmon deposit into watersheds are almost entirely foreign.  Studies have shown that these nutrients are very important for the growth and survival of many freshwater organisms, as well as both plant and animal life that live in the area surrounding these watersheds.  A study was done in a stream in the Washington North Cascades, where researchers evaluated the effect of salmon carcasses on the growth of aquatic insects.  The study found that the carcasses assisted in the growth of 15 different insect species in the stream.  They also found that the salmon carcasses are a nutritionally important food source for several different species of Caddisfly larvae, which themselves are an important food source for juvenile salmon who have not yet migrated to the ocean (Minakawa et al., 654).  A similar article states that “spawning salmon can enhance the invertebrate food base for higher tropic levels, such as predatory fish” (Chaloner, 438) and that “Invertebrate use of salmon meat probably enhances retention and incorporation of [nutrients] into stream off webs because, in addition to being abundantly distributed, invertebrates are probably less likely than carcasses and eggs to be flushed downstream” (Chaloner, 439).  This information regarding insects can be observed in the figure below from the Minakawa paper, which shows how in most cases, the presence of salmon carcasses greatly enhances salmon growth.

As pacific salmon populations have dropped dramatically over the past century or so (see figures below, which compare average historical river runs from the late 1800’s on the left, to individual runs in the late 1990’s, and early 2000’s on the right), some people have asked, why? (Meengs, 18).  There are many different answers to this question, but here are several: overfishing, pollution, damming, and climate change.  Overfishing is fairly straightforward, historically salmon has been a desired food source in the Pacific Northwest, and has been heavily exploited.  When salmon stocks crashed, commercial hatcheries were set up to restore salmon populations.  Still, however, the private and commercial fishing industries today are pushing the limits of salmon stocks, limiting the health of the species as a whole.  In addition to overfishing, pollution has been shown to affect the health of salmon.  While waste and runoff from cities is a contributing factor, the largest threat comes from industrial pollution.  A prime example of this is the proposed Pebble Mine in Bristol Bay, Alaska.  If it is completed, the mine will be established for copper extraction at the site of the world’s largest wild Sockeye salmon run.  The resulting runoff and acidic pollution from this mine would flow directly into the surrounding watershed, and almost certainly decimate or even eliminate the entire Sockeye run, not to mention other aquatic species (Wild Salmon Center, 1).  Another cause for Pacific salmon population declines are dams.  Because salmon travel far up rivers and streams to spawn, dams that are built in their path effectively eliminate their ability to breed and produce offspring.  While some dams have fish ladders to allow salmon to pass through them, many of them don’t, and as a result, salmon populations in those rivers have died off.  The last major cause for salmon population declines is climate change, specifically global warming.  As air temperatures rise, so do water temperatures.  Warmer water holds less oxygen, which means that it becomes more difficult for salmon to make their way hundreds of miles up rivers and streams to reach their spawning grounds.  In addition, the warmer water temperatures cause salmon to use up their energy reserves more quickly, and also makes them more prone to infections.

While declines in salmon populations is undeniably bad for the salmon themselves, it is also harmful for other organisms in their watershed.  Because salmon provide such a large source of food and nutrients for so many species, it is reasonable to assume that their further loss could potentially be devastating to other surrounding species.  If salmon disappear from the rivers in the Pacific Northwest, it could have a profound effect on the biodiversity in the areas they lived in.  Species such as the Caddisfly and the Grizzly Bear, which rely heavily on salmon (both dead and alive) could show large population losses, or in some cases, local extinctions in areas where salmon disappear.  As a result, it is important that salmon are treated as an extremely valuable resource, and steps are taken to preserve them.  The easiest way to approach this issue is to simply cut down on the sources that are harming the salmon.  For example, fishing limits could be decreased, regulations could be put in place to prevent or cut down on pollution, especially near watersheds, dams could be taken down, and more steps could be taken to stop climate change.  Basic actions like these are the key to stopping, and perhaps even reversing the damage done on watersheds in the Pacific Northwest so that salmon populations can recover.