Surrounded by ocean and formed by volcanic hot spots, Hawaii’s isolation and geological activity shape the biodiversity of the islands. With over 25,000 unique species, Hawaii is one of the most biologically diverse regions on the planet. A large percentage of these species are only found in the islands of Hawaii.
While the number of species is impressive, these birds, insects, mammals, and plants live in a delicate balance. 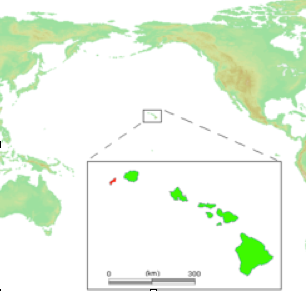 As an isolated oceanic archipelago, the Hawaiian Islands offer insight into evolutionary processes that are unmatched in their beauty and complexity. Left to evolve on their own in the middle of the Pacific Ocean, Hawaiian species developed their own unique evolutionary traits. Each species’ survival depends on a host of other species, and when one species is lost the entire framework of Hawaiian ecology is disturbed. Unfortunately, Hawaii has the highest rate of extinction per square mile on Earth, about 4600 non-native plant species alone thus  making many endemic Hawaiian species threatened or endangered.


Much of this crisis is a direct result of human colonization of the islands. Originally there were no mosquitoes or ticks, reptiles or amphibians, and the only mammals were the Hawaiian hoary bat and the Hawaiian monk seal. When humans came, they brought pigs, mice, lice, cockroaches, and a whole host of invasive plants. These invasive species have wreaked havoc on the Hawaiian ecosystem. To reach Earth’s most isolated archipelago, new species had to arrive either by air or by sea. Before humans stepped onto their shores, it is estimated that only about every 100,000 years did a new species glide down to the islands or wash up on the beach. This gave Hawaii’s ecosystem a lot of time to acclimate to each new species and incorporate each addition into the Hawaiian biome. 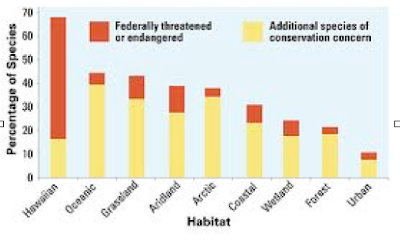 Today, it is estimated that new species are being introduced to Hawaii at a rate that is 2 million times more rapid than the natural rate. With international travel and the importing of goods, it is easier than ever for new species to be introduced. It is also more crucial than ever that new invasive species be kept off the islands. With so many native Hawaiian species endangered, and millions of dollars worth of crops at risk, the threat from invasive species is just too high. Besides rigorous screening at airports, scientists are taking new measures to ensure the survival of Hawaii’s vulnerable biodiversity. 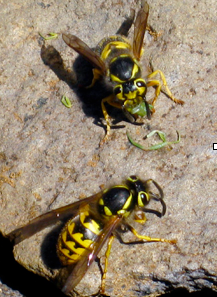 The western yellow jackets (Vespula pensylvanica) are not the only species of wasp reshaping Hawaiian flora and fauna. These yellow jackets were accidentally introduced to the Hawaiian Islands in the 1900’s.  Since 2005, tiny orange wasps called Erythrina gall wasps have been decimating the wiliwili tree population, an endemic Hawaiian deciduous tree that grows up to 30 feet tall.  Native to East Africa, the tiny wasps, about one-third the size of a mosquito, inject their eggs into the leaves of the wiliwili tree. The egg mass grows into a small lump or gall, which interferes with the tree’s ability to harvest sunlight and water. As a result the tree withers and dies. All over the islands of Hawaii, massive wiliwili carcasses dot the forests as well as the residential and agricultural areas. Besides providing habitat for Hawaiian wildlife, wiliwili trees have long been used as windbreaks. Planted in a straight line along the edges of crop fields, the wiliwilis protect the crops from wind damage. If the wiliwili trees die, so do the crops. It is predicted that if the gall wasp epidemic is not stopped, massive portions of Hawaiian forest will turn into desert (1).
To eradicate the gall wasps, scientists have no choice but to introduce another species of wasp to the Hawaiian islands, so they “recruited” the Eurytoma wasp. These larger wasps inject their eggs into the Erythrina egg galls, where they develop more quickly than the smaller gall wasp species and hatch first. Once the Eurytoma’s hatch they feed on the unhatched Erythrina larvae. This keeps the gall wasp population numbers low, and will hopefully save the wiliwilis. 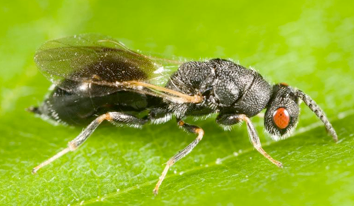 The first batch of 500 Eurytoma wasps were harvested in Tanzania near Mt. Kilimanjaro, and released into Honolulu’s Liliuokalani Botanical Gardens in November 2008. Scientists will have to keep a close eye on these foreign settlers. Hawaii has a long history of good intentions gone bad when it comes to introduced biological-control agents. The worst example is the mongoose, which was brought to the islands in 1883 by sugar cane farmers to control rat populations. Sadly, the mongooses primarily preyed upon Hawaiian birds and eggs, driving several species to near extinction and posing a major threat to endangered animals. 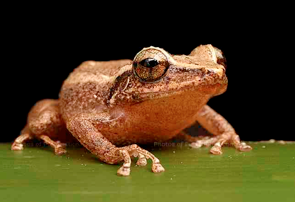 Another invader, the coqui frog from Puerto Rico, arrived in shipments of plants in the late 1980s. Male coqui frogs sound a loud mating call that annoys some of Hawaii’s human residents. But aside from being a nuisance to humans, some people worry that as the frogs advance throughout the islands, they may be setting the stage for other invasions. https://www.youtube.com/watch?v=nAanMkmXZDo For example, frog-eating snakes, like the brown tree snake, could find a plentiful food source in the coquis. In Guam, the brown tree snake has done major damage, wiping out bird populations.

No one knows what will happen to the Hawaiian Island’s biodiversity in the future, although there are hints that can be found in the fiery nature of Hawaii itself. Every day, fresh lava spills into the ocean, new land is being formed continuousy, which will be the land that will someday be new habitat for Hawaiian plants and animals, both invasive and native. Just as the geography and landscape of Hawaii is always changing, so is the shape of life on these beautiful Hawaiian islands.