The Battle to Recover the Mexican Gray Wolf

The Battle to Recover the Mexican Gray Wolf
by Julia Goldberg

The Mexican gray wolf, Canis lupus baileyi, is the smallest and most genetically distinct subspecies of the gray wolf. There was once a time when the Mexican gray wolf roamed throughout Arizona, Texas, New Mexico, and Mexico. But as human settlement spread across the continent in the early 1900s, the wolf population began to decline (U.S.F.W.S., 2013). As ungulates, large hoofed mammals, are a staple of the wolves’ diets, they put livestock at great risk of predation (Defenders of Wildlife, 2010). As the conflict between the humans and the wolves escalated the wolves were methodically hunted in an attempt to protect livestock (Center for Biological Diversity, 2013). The Mexican Gray Wolf is now the most endangered type of wolf in the world today. 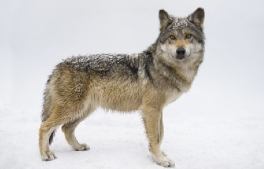 Between 1915 and 1973 The U.S. Fish and Wildlife Service (USFWS) worked to poison and trap nearly all of the Mexican gray wolves (Center for Biological Diversity, 2013). Once the wolf population in the United States had been exterminated, the USFWS sent custom-concocted poison to Mexico in an attempt to finish off the species (Foster, 2013). This aggressive hunting led to a population bottleneck, an event that drastically reduces the size of a population. A population bottleneck can be detrimental to a species by greatly reducing genetic diversity. Genetic diversity is vital to the survival of a species, and without it, populations face a greater chance of eradication (Scitable, 2013).

In 1973, Congress passed the Endangered Species Act. Ironically, the U.S. Fish and Wildlife Service, the same organization that had previously worked to destroy the species, began a program to protect of wolves and added them to the endangered species list in 1976 (U.S.F.W.S., 2013). Between 1977 and 1980 the last five Mexican gray wolf survivors were captured and put into captive breeding programs in an attempt to save the species (Center for Biological Diversity, 2013).  Luckily, the wolves were able to persist due to the efforts of these captive breeding programs. Today there are approximately 300 wolves in captive-breeding facilities found in 47 zoos and sanctuaries in the United States and Mexico. However, because all of the Mexican gray wolves alive today are descendents from the original five captured survivors, the genetic diversity of the species is severely limited (Platt, 2013). The effects of this lack of genetic diversity puts the wolves at a much higher risk of susceptibility to disease and far less likely to produce healthy offspring (Defenders of Wildlife, 2013). In 2007 this was confirmed when scientists studying the wolves reported the first signs of inbreeding depression in the form of smaller litters and lower pup survival rates (Foster, 2013).

The Mexican Gray Wolf Recovery Program began the first reintroductions in 1998 with the release of eleven wolves in Arizona. In the following years more wolves were released into New Mexico and Arizona (Platt, 2013). March 29, 2013 marked the 15th year anniversary of the wolves’ first reintroduction into the wild. However, after fifteen years of work in the captive breeding programs, the Mexican gray wolves are still at great risk of extinction (Defenders of Wildlife, 2013). Unfortunately, the wolves still face the threats of humans despite the many efforts to protect them. Of the initial eleven wolves that were first reintroduced in 1998, five died that same year: a car hit one, and four were illegally shot. More recently, in 2011 and 2012, twelve more wolves died: nine were shot or hit by cars (Platt, 2013). 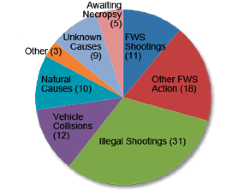 Unfortunately, human actions are the leading cause of Mexican wolf mortality in the Blue Range Wolf Reintroduction Area. The chart to the right, provided by the U.S. Fish and Wildlife Service, outlines the leading causes of fatalities. (Reese, 2010)

Defenders of Wildlife (DOW) is a national conservation organization whose mission is the preservation of the world’s wildlife biodiversity. DOW has developed an emergency rescue plan in an effort to save the Mexican gray wolf. Lack of genetic diversity is currently one of the biggest threats to the species. DOW proposes releasing more captive bred wolves into the wild in order to increase their genetic diversity. Releasing individuals that are distinctly genetically diverse from the existing population could provide the solution to the genetic problem. (Defenders of Wildlife, 2013).

On January 16, 2013, M1133, a male four-year-old Mexican gray wolf, was released into Arizona’s Apache National Forest, marking the first reintroduction since 2008. M1133 is a captive bred wolf that has never been in the wild. The U.S. Fish and Wildlife Service selected him for reintroduction because he possessed distinct genetic diversity to the existing Bluestem wolf pack. The Bluestem wolf pack is comprised of seven individuals whose alpha male was illegally shot in 2012. If M1133 was able to breed with the alpha female, he would be able to introduce the required genetic diversity into the gray wolf population. Unfortunately, only one month later it was reported that M1133 was rejected by the Bluestem wolf pack and strayed into an area where there was little chance he would be able to find a mate. M1133 was then recaptured and returned to captivity so that he may be again released under the correct conditions. (Platt, 2013)

The once thriving population of wolves is now reduced to less than sixty individuals in the wild (Platt, 2013).  Because wolves live in highly structured social hierarchies called a packs, the alphas, or the male and female leaders, are generally the only individuals to mate (Wolf Haven International, 2007). Because of this strict social system, there are currently only three breeding pairs of Mexican gray wolves out of the sixty found in the wild (Center for Biological Diversity, 2013).

Despite the years of hard work and dedication to reviving the Mexican gray wolf population, the species still faces the risk of extinction. The lack of genetic diversity, difficulties in reintroduction, severe lack of breeding pairs, their threat to livestock, and illegal hunting have taken a serious toll on the species. The hope is that with a great deal of energy and focus, the species will be able to persist and become another conservation success story, thus preserving another aspect of world biodiversity.