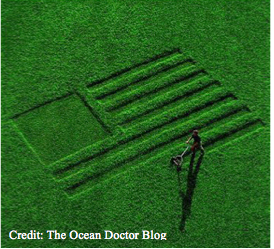 No one is stranger to social stigma. Most of us probably began noticing it in middle or high school—peers judging one another based on style, activities, grades, and culture. However, the less familiar, yet surprisingly powerful stigmas are those surrounding the environmental movement.

Take for example, the stigma of the household lawn. Front lawns are a popular part of American neighborhoods, past and present. While planting a high diversity of seasonal, native plant life is known to be more environmentally beneficial (Robbins and Sharp, 2003), Americans continue to maintain their low diversity, albeit, green, lawns. In fact, in the United States, lawns cover upwards of 50,000 square miles, of which more than 80% are residential (Quigley, 2000). The American lawn is generally composed of a single species of turf grass (Robbins and Sharp, 2003). And unlike in wild conditions, lawn grass is lush green all year and does not compete with other species. To maintain these unnatural conditions, lawns require regular watering and the use of fertilizer and pesticide. In 1999, 49.2 million American households purchased lawn fertilizer and 37.4 million households purchased insecticides (Quigley, 2000). The EPA estimated that 70 million pounds of chemicals were being applied annually to lawns, representing a higher concentration of chemical input than for any form of agriculture.

So, what is it about these heavily manicured spaces that Americans find so necessary? 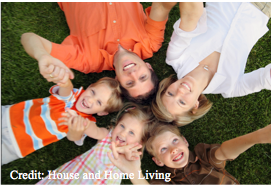 An article recently published in the journal, Landscape and Urban Planning, pins their enduring existence on social stigma. The article states: “A lush, perfectly-maintained lawn is not only a sign of homemaking prowess but, in some people’s eyes, also reflects on one’s worth as a parent or neighbor.” The team found that people who were part of homeowners associations tended to apply more fertilizer to their lawns. The study concluded that homeowners associations “share household lawn behaviors: by obliging people to maintain a high esthetic standard, they encourage higher use of chemicals to attain those standards.” A separate survey (Ohio State University, 2000) asked homeowners in Ohio why they put in the effort to maintain their front lawns, with many of them responding similar to the following participant:      “…Oh, the lawn is just here to please the neighbors.”

In essence, the household lawn standard differs little from any other social stigma—devaluing and placing judgment upon an individual or group based upon their culture, social status, gender, race, or in this case, the color of their lawn.
We can think of homeowners association as analogous to the popular girls in high school. However, the difference here being, the social standard of the American lawn is proving incredibly costly to the Earth’s biodiversity.

On average, each lawn takes up an acre of land. This space could be used to plant a diversity of native flora, or, vegetable gardens for families to partially sustain themselves. Additionally, lawn pesticides and fertilizers run off the grass and end up polluting nearby bodies of water, deforming and killing many organisms each year (Robbins and Sharp, 2003).

And lawns do not just take up space and pollute surrounding ecosystems—they also require a large amount of water to stay desirably green year-round. Take a look at Eugene, Oregon for example. Given average rainfall, watering an acre of lawn here, once a week, requires 432,115 gallons of water each year (try out the "Water Calculator" for yourself). To put this number in perspective, the average human being requires an input of just 228 gallons of water in a year.

Social stigmas have also impacted environmental efforts through the means of product branding. It appears that politically Conservative individuals will take a financial hit to avoid being associated with buying “eco-friendly.” A study in the Proceedings of the National Academy of Sciences gave 210 people a choice between buying an incandescent light bulb or an energy-efficient, longer-lasting fluorescent light bulb. Some of the fluorescent bulbs sported a “Protect the Environment” sticker, while others did not. On the bright side, when the incandescent and fluorescent bulbs were equal in price, nearly every participant chose fluorescent. However, when the fluorescent bulb cost more, the results became complicated. Conservatives presented with an eco-labeled fluorescent were about half as likely to choose it as conservatives presented with a bulb without an environmental label. What this boils down to is that Conservatives are willing to bear a long-term financial cost to avoid purchasing a product associated with valuing environmental protection.

These Conservatives did not want to been seen as “environmentalists,” similar to the way someone going out to purchase a face-lift does not want to be seen as “old.” Social stigma impacts all parts of human culture, and it is not ceasing at the environmental movement. So let us assume stigmas are an inevitable aspect of society. However, instead of working against eco-consciousness, why not drive it? Is it possible for stigmatization to impact the planet’s biodiversity in a positive way?

Once again, let us return to the household lawn. Rather than working to change public desire for a "lawn," it may be more practical and profitable for the industry to meet that expectation with more sustainable plants and maintenance methods. Once homeowners associations agree to change lawn standards, the rest of the community is likely to follow suit. Instead of praising families for green, monospecific lawns, it would become standard to applaud neighbors for a fruitful garden or a hodgepodge of native wildflowers (see John Greenlee’s The American Meadow as a great example of this). And why not frown upon the neighbor whose stream of chemical-rich water runs off their lawn onto the road? This runoff is detrimental to the entire community—be it human, animal, plant, or microbe.

In fact, using stigmas to environmentally motivate others is already in the works. On monthly electric bills, some cities include how much electricity your own household uses relative to your neighbors. One woman involved in Salt Lake City’s program stated, “My first thought was, I am embarrassed," Her family uses 13 percent more energy than her average neighbor (See news story here). Further, a 2009 article published on The Mother Nature Network reported that UCLA researcher, Noah Goldstein, and his team discovered that a standard environmental message on a sign in a hotel bathroom is not enough to encourage visitors to reuse towels. However, telling patrons that other hotel visitors had been hanging their towels on the racks instead of leaving them on the floor made them 25 percent more likely to do the same. 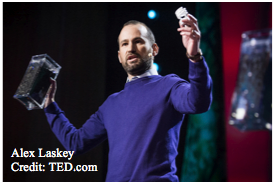 Perhaps revealing to others your household energy, water, and pesticide use, and even waste produced, can be used as a tool to motivate more sustainable decisions. Awareness of your community’s usage, as well as the community’s awareness to your own, appears to be a potent motivator. It must be similar to the logic behind the popular “I gave blood” and “I voted” stickers. People are proud of their actions that are socially responsible. In February of this year, Alex Laskey gave a TED talk on exactly this—“How behavioral science can lower your energy bill.” He and his colleagues started a company, based on human behavioral inclinations, which delivers personalized home energy reports. The reports show your household consumption as compared to your neighbors’ in similar sized homes. It turns out—American households receiving Laskey’s personalized reports have saved over $250 million on their energy bills in the past five years. Again, we see, social pressure is pretty effective.
Stigmatization need not be innately negative. An ugly history of discrimination and bad high school blockbusters has given stigmas a nasty rap. However, stigmas are an extremely powerful tool in motivating sustainable action—potentially the most powerful tool environmentalists have. So, is it possible to use them in a positive way, to preserve the Earth’s remaining resources? After all these years spent hating on peer pressure, is it time we embrace it?