Climate Change and Biological Diversity: How species, population shifts and genes are affected due to recent climate change.

The human population is facing one of the most distributing, devastating, and confusing environmental “shifts” in recorded history. Biologically and ecologically, scientists everywhere are in a constant struggle analyzing data related to earth’s ever-changing climate. The truth is there is a wide range of information on climate change, what it is, how it works, and how we humans are the root cause of it all. Yet, how does climate change effect biological diversity? What happens when certain trophic levels are affected by CO2 emissions? How does climate change effect plant migration? Or, how do seasonal shifts due to climate change effect the genetic makeup of a species?  This blog post looks at a couple different studies as to how different forms of climate change are affecting a few areas of biological diversity.
Most people are aware of the mainstream understanding of climate change. Specifically how humans are heavily contributing to green house gas emissions which traps heat within the atmosphere, warms the planet, and attributes to the unnatural cause of climate change. A recent study has found that the amount of Carbon Dioxide, one of the major green house gases contributing to climate change, leaking into our atmosphere on a daily bases has reached an incredibly high level of “400 parts per million” (Gillis). Scientists agree this is a level that the atmosphere has never reached and that this may lead to “large changes in the climate and the level of the sea” (Gillis).  We can only assume the rapidity of climate change will increase within the next century, noting this recent data pertaining to CO2 levels, and that this will also have direct and indirect effects on biological diversity. 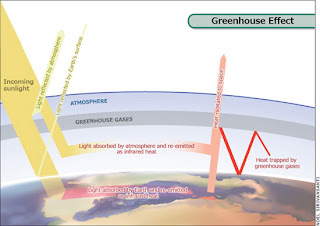 (http://www.nature.com/scitable/knowledge/library/global-atmospheric-change-and-animal-populations-13254648)
Figure #1: The greenhouse effect.
The first example when looking at the effects of climate change on biological diversity can be seen by looking at the food availability for a bird species and how that availability may alter their population. For this example, this is done through looking at a “tri-trophic interaction” (Muller, 515). Specifically, the study looked at the effect of high vs low CO2 associated compounds (in this study the compounds were tannins and phenolic glycosides) within a species of an aspen plant that were eaten by caterpillar larvae. In some plants, such as the ones studied in this example, when there are high levels of CO2 in the plant that can lead to higher levels of other compounds within the plant. Depending on which level of CO2 associated aspen plant the larvae ate, they tested to see if the bird species, Poecile Atricapillus, were “picky” about the caterpillars they ate. Ether choosing caterpillars that ate aspen trees associated with high or low CO2 compounds (Muller, 514). The study ended up finding that “Chickadees  (Poecile Atricapillus) consistently preferred caterpillars fed foliage with lower concentrations of condensed tannins and phenolic glycosides” (Muller, 514). This suggests that because the level of compounds in the aspen plant species are affected by the level of CO2 associated with the plants, due to the effects of our changing climate, this could be leading to possible changes in bird behavior and population  (Mondor). This doesn’t seem too hard to believe, though, that climate change is having effects on populations and food availability. But how is climate change affecting other levels of biological diversity? Such as biological levels that are “invisible”? Another part of biological diversity that is surprisingly changing due to climate change is the genetic makeup of organisms, something that has never been seen. 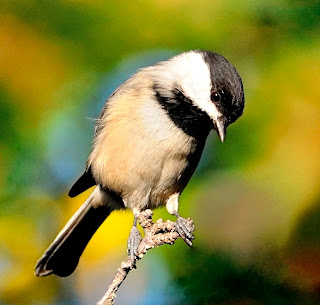 An example of this comes from a study done by William E. Bradshaw and Christina M. Holzapfel at the University of Oregon. A section of their lab is dedicated to looking at the genetic adaptation in the purple pitcher plant mosquito species Wyeomyia smithii, a mosquito that spends most of its life in the purple pitcher plant. This adaptation is occurring due to sudden seasonal changes associated with climate change along the east coast of North America (Bradshaw, 14509).  In 2001, they published a groundbreaking article that proved there was a “genetic shift in the photoperiodic response correlated with global warming”, which was the title of the journal they published. The photoperiodic response, or photoperidism, is a genetic seasonal timing mechanism in which W. Smithii, and many other animals, uses to tell them what time of year it is. In W. Smithii this is easily measured because they “continue to respond to photoperiod and diapause is always determinate by long days” (Bradshaw, 14510). No one knows in any organism what genes are associated with the photoperiodism
Bradshaw and Holzapfel measured what they called the “critical photoperiod” in “populations collected in 1972 and 1996” (Bradshaw, 14510). Comparing populations collected in 1972 and 1996 Bradshaw and Holzapfel discovered a drastic change in the critical photoperiod within W. Smithii. They showed that, in as short of a period of five years, these mosquitoes had “significantly shorter critical photoperiods in the populations collected recently then in populations collected 24 years previously” (Bradshaw 14510). Meaning that W. Smithii is changing it's genetic makeup in order to adjust to the longer summers and shorter winters.  This was some of first evidence that seasonal changes due to climate change are having an affected on the genetic makeup of a species. Genetic adjustments such as this could possibly be occurring all across the world within in millions of species. Bradshaw and Holzapfel continue to look for the genes associated with the photoperiodic response. Finding these genes and understating how these genes work could be useful in many different applications pertaining to how climate change is effecting the genetic makeup of species all across the globe.  We now know that climate change is affecting complex biological functions such as the genetic makeup of a species and food availability. But what about simpler and more understood biological diversity functions, such as plant migration? 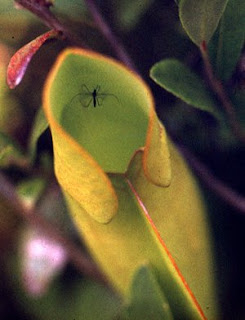 (http://uonews.uoregon.edu/archive/news-release/2012/10/mosquitoes-genes-alter-thinking-about-resilience-face-climate-change)
Figure #3: Wyeomyia smithii within a purple pitcher plant.
One last example connecting biodiversity and climate change can be seen by looking at the changes within simple forms of migration within plants. Without the natural consistent migration of plants, biological diversity in most ecosystems can be greatly altered. Plants use two forms of migration including “‘front’ in short steps, or as a rapid process mediated by long-distance dispersal events or ‘jumps’” (Neilson, 751). Most plant species use each process apart of migration and each process is just as important as the other. A journal by Ronald Nielson et. al. entitled “forecasting regional to global plant migration in response to climate change” brought up several different areas of plant migration that give insight as to how climate change is altering those areas. It seems that for the most part there is evidence that suggests long-distance dispersal, which occurs by the processes of “anemochory; or wind dispersal for terrestrial plants, and zoochory; or dispersal by animals” (Neilson, 752) has been affected by certain impacts climate change. For example, a species of Lodgepole pine are having their migration affected by recent increases in fires across New Zealand due to “contemporary climate change” (Neilson, 753). It appears that the Lodgepole pine species is “expanding at its northern limits” where the rate of migration is “lagging behind the rate of climate change” (Neilson, 753). 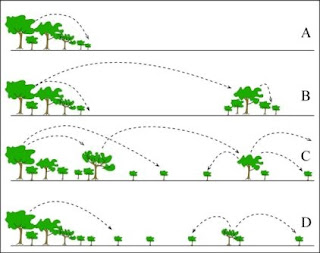 (http://www.uni-goettingen.de/de/101660.html)
Figure #4: Examples of plant migration through long-distance dispersal.
These findings are of major concern to scientists. If plant migration cannot keep up with the rate of climate change plant species may struggle to adapt to new environments, which in turn may “reduce the adaptability of those ecosystems to climate change” (Neilson, 750). This may impact what this study calls the “insurance theory of diversity and stability of ecosystems” (Neilson, 750). The insurance theory basically says that if a species disappears from an ecosystem there is usually some sort of ecological insurance, if you will, that through biological functions such as migration another species similar in function and structure will eventually move into that ecosystem. Plant species that cannot keep up their migration rate, usually via long-distance dispersal, to the rate of climate change reduce their ability to thrive and change the landscape of ecosystems that would normally be succeeded by those plant species. This in turn makes those ecosystems less adaptable. The authors of this study concluded that understanding the importance of plant migration and the insurance theory “will be necessary to address the true importance of changes in biological diversity to sustained ecological function in a rapidly changing world” (Neilson, 758).
Biological diversity, in a nutshell, includes pretty much any variable that an organism relies on to thrive and survive.  Biological diversity is an accumulation of genes, species, populations, and ecosystems across an environment (Green). Without the correct functioning of these areas it could lead to scary realities like “reduced genetic diversity, loss of evolutionary history and functional traits, and the loss of ecosystem services” (Green), in which if any of those occurred it would create a extremely inhospitable environment.
As described in the studies talked about in this blog there seems to be a key correlation between biological diversity and climate change in which the world needs to be aware of.  Yet it seems unclear whether the impact of climate change is having negative or positive effects on biological diversity. But, it is clear that we are seeing negative effects due to some processes related to climate change on some organism. For example, because the ocean absorbs most of the CO2 in the atmosphere and because CO2 levels are increasing due to human activity, some species in the ocean such as the unique “Owl fish” that thrive in “oxygen minimum zones” will most likely suffer from these increased CO2 levels. This “may increase respiratory demands in already low O2 environments” (Mondor) in creatures such as the owl fish. Also, research at the Aspen Free-Air CO2 Enrichment site found that an insect species, Poplar aphids, that lives on a species of an aspen tree, are becoming “behaviorally different”. When the insects are exposed to an aspen species that’s been grown under high CO2 levels as opposed to high O3 levels, the insect changes its pheromone dispersal rate dramatically (Mondor). This could create confusion within the insect, have effects on population numbers, and be devastating to healthy aspen populations if CO2 levels continue to rise.  There are many different applications of biological diversity in which climate change can be associated with. The ones talked about in this blog are just a portion of the larger topics related to biological diversity and climate change that need to be addressed. By looking at examples such as those presented in this blog we will hopefully be able to understand the impacts climate change, be it negative or positive from humans or not, is having on the environment and biological diversity.

Bradshaw, William E., and Christina M. Holsapfel. "Genetic Shift in Photoperiodic Response Correlated with Global Warming." Proceedings of the National Academy of Sciences of the United States of America 98.25 (2001): 14509-4511.