Overfishing: the end to ocean biodiversity?


Overfishing: the end to ocean biodiversity?
Some of my best memories were fishing in the river with my dad. You never forget the first time you bate the hook yourself, cast the perfect cast and catch your first fish. Now imagine your grandchildren and the fact that they may never experience fishing for themselves. This is our future if we continue to overfish our oceans worldwide. 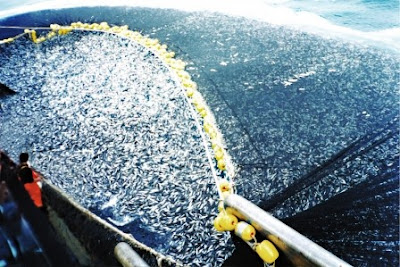 Overfishing is the harvesting of animals from the ocean, by industrialized fleets, faster than they can replenish themselves. This may be the single biggest threat to ocean ecosystems. The first known case of over fishing occurred in the beginning of the 1800's with the decimation of the world’s whale populations, for their blubber which was used as lamp oil. In 1989, the peak of industrialized fishing, about 90 million tons of catch were taken from the ocean, and harvests have declined or stagnated ever since. According to the National Geographic more than 85 million tons of wild fish and shellfish are caught in the oceans annually. Fisheries for the most sought-after species, like orange roughy, Chilean sea bass, and Bluefin tuna have collapsed. It's estimated that industrial fishing has reduced the number of large ocean fish to just 10 percent of their preindustrial population. And when the target species is gone the next fish down the food chain is exploited. This "fishing down" is highly disruptive to the food chain and slows recovery. 85 percent of the world's fisheries are fully exploited, over exploited or have collapsed because the global fishing fleet is harvesting 2 and a half times the sustainable level.  The journal Science published a study of catch data that predicted if fishing continues at current rates, all the worlds fisheries will have collapsed by the year 2048. 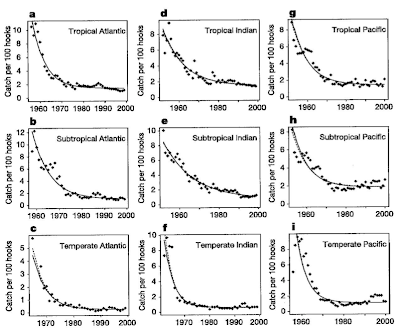 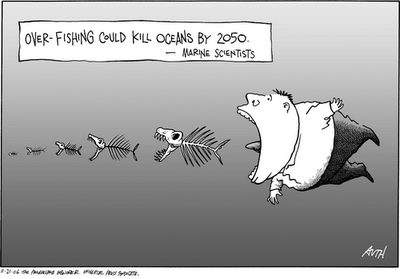 So why is overfishing so common place? Well, 1 in 5 people use fish as their main source of protein and with fish prices increasing faster than that of meat, the appeal of fishing has increased greatly. Another large reason is regulation or should I say lack thereof. Many undeveloped countries do not have proper fishing regulations and even within the countries that do, fisherman are not following regulations strictly. An increase in fisherman illegally harvesting or not reporting catches maybe related to stricter rules because of sharp decline in desirable fish. Fishing vessels have also become so efficient that they are removing fish quicker than Mother Nature can replenish the oceans. These giant floating factories contain processing and packing plants, large storage capacity and motors powerful enough to pull mile after mile of fishing gear through the ocean.

Because of our many world dilemmas such as desertification, deforestation, global warming, etc., overfishing is often overlooked, however the effects it had, has and will have on the world around us will impact us greatly. Overfishing will start a food chain decline of events. The first to go will be large fish this of course is due to the fact that they live longer and therefore grow and reproduce slower and are more vulnerable. An example of these large fish are certain species of rockfish that can live to be over 100 years old and are severely depleted by overfishing throughout the years. Even though new fishing restrictions have been put in place, it will take decades for these fish populations to start recovering. When the big fish are gone, animals further down the food chain like smaller fish, crustaceans and mollusks are harvested. These animals are prey for other larger fish and marine birds and mammals, their harvest effects the entire ecosystem. An additional effect of overfishing large fish is that this gives more opportunity of survival rate for smaller fish. This can cause smaller fish of a same species to mature quicker which causes them to be smaller when reproducing and leads to miniaturization. A specific example of this is seen in Pacific pink salmon. According to the article “The Effects of Overfishing on Marine Biodiversity,” over 80 percent of the spawning fish being caught showed a significant decrease in size and weight. Overfishing of any one species also greatly effects genetic variability of that species. Without variability the species can be more vulnerable to diseases, predators and other stresses. Another overwhelming issue is by-catch, which is the act of catching unwanted animals such as corals, starfish, turtles, etc. For every pound of shrimp caught, ten pounds of unwanted creatures are killed unintentionally. 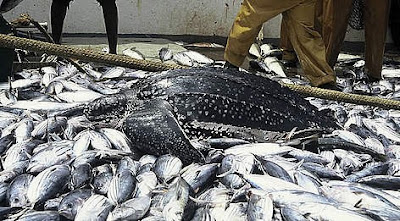 Several ideas are being looked at to help in decreasing overfishing but the first thing to do is inform. If people are more aware of the cause and effect of their actions, they are more likely to change their processes for a better outcome. A study by the Wildlife Conservation Society and other groups suggests that "co-management" or collaboration between fisherman, conservation groups and governments is having success in not only making sure that the fisherman can have a livelihood but that the fish are being protected as well. People are more likely to follow rules that they helped make, than rules they don't feel like they have any say in, placed on them by the government. The study shows that using these ideas and techniques that "co-managed" fisheries are fifty percent less likely to be overfished, decreasing damage to the ecosystems. Another suggestion being studied is a cash share program where fisherman are granted a percentage share of the total allowable catch. This can be done individually or in cooperatives. Fisherman can also be granted exclusive access to specific and in high demand fishing zones. If the fisherman do not exceed their fishing limit, they are privileged with more fishing availability during the best weather and market conditions. This cash share program was used in the Gulf of Mexico for red snapper. "With the new management effort, the 2007 commercial snapper season was open year-round for the first time since 1990." (www.edf.org/CatchSharesScience). 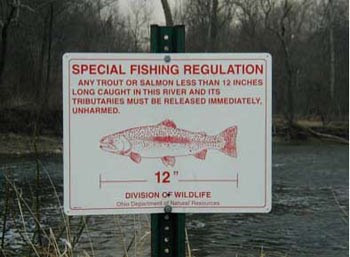 None of these ideas alone will fix our continued issue of overfishing but with help of others to continue to inform and with new and more efficient regulations we may get this under control before it's too late. And maybe just maybe we will get the chance to take our grandchildren out to the river for their first fishing experience.

Posted by Ashley Ottovich at 12:13 PM