Seed banks: the preservers of plant diversity? by Ben Geller


Primary producers, autotrophs, whatever you want to call them - as John Drori said in his TED talk - “everything depends on plants, they are the base of the food chain.”

Due to their role in ecosystems and vast diversity, protection of the diversity of plants is of utmost importance. While diversity does not explicitly seem to be that important, it plays a vital role in the relationship between every living organism and its environment, including biotic and abiotic factors. As seen in video 1, biological diversity is an important factor relating to genetics, communities, and ecosystems. Essentially, the more diverse a factor is, the better chance it has to stay around.

Plant diversity is currently under threat.  According to Tilman et al., “humans now appropriate more than a third of all terrestrial primary production, and, in doing so, have simplified or destroyed large portions of some types of ecosystems, leaving behind fragments that often lack herbivores or predators that provided important top-down constraints” (Tilman 5433) This means that humans use 1/3 of primary production for our own purposes including food, medicine, fuel, construction, clothing, etc. and, in return, we are directly reducing plant diversity and indirectly killing plants.  Apart from major conservation efforts such as reduction of deforestation, a major method of preserving diversity is through seed banks. In this article I will discuss whether seed banks are a viable option for preserving the diversity of plants.

http://antranik.org/wp-content/uploads/2011/06/plant-evolution.jpg
Figure 1: Evolution  of plants from algae describing their vast diversity, and accumulation of varying traits. 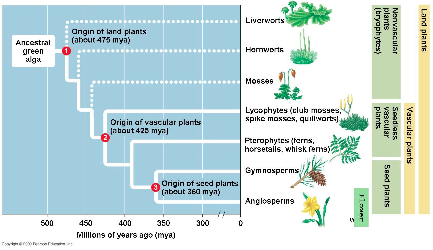 A seed bank is exactly what the name suggests: it is essentially a storage facility for seeds. Some might say that there are problems with the concept of a seed bank and to a certain degree they are right. One major problem with seed banks is the vast diversity of plants, as seen in figure 1. After all, plants compose an entire kingdom of organisms, all of which cover most of our planet, with vast morphological differences and functions.  According to Drori, in 2009, the millennium seed bank had just stored their 3 billionth seed and had a total of 10% of the world’s species of plants and by the year 2020, only 25% species seeds would have been saved.

One major flaw with the concept of a seed bank is the fact that it only stores seeds. Believe it or not, not all plants have seeds.  In fact, only the most recently evolved plants, gymnosperms and angiosperms, do. However, since their evolution, the term ‘radiation of angiosperms’ describes how they have spread their existence and vast diversity across the planet.  As seen in figure 1, plants preceding the gymnosperms do not have seeds.  They are all gametophyte dominant, which means their haploid phase is the major player and they produce spores not seeds.  This also means that many of the plants that produce our atmospheric oxygen, 90% of which is produced by oceanic algae and phytoplankton, cannot be stored in these seed banks.

Looking at it with a blank slate of knowledge regarding biodiversity and its benefits, one would think the homogenization of plants, mainly crops and agriculture but native plants vs. non-native/invasives as well, would be a good thing. It could mean less chance of an illness from more familiar plants, as well the ability to make them easier to grow more efficiently. As previously described, diversity is essential among any phyla, especially plants. Diversity is how plants overcome disease, evolutionary arms race (in which predators vs. prey adapt to each others adaptations to prey on, or defend against the other, respectively), harsh conditions, varying levels of nutrients, etc. Without diversity neither plants nor any organisms would be able to overcome such major obstacles.

Another major problem with seed banks is with genetic drift, displayed in figure 2, which involves a sort of bottlenecking of the ‘saved’ species. “Genetic drift is the random change in allele frequency that occurs because gametes transmitted from one generation to the next carry only a sample of the alleles present in the parental generation.” (Ellstrand 218) The most common analogy for genetic drift is jelly beans.  For example, if you have a jar full of jelly beans of 2 colors (each representing a neutral allele) and you take a sample of the beans, the proportions on average will be 50/50. However, if you happen to select a slightly higher proportion of one allele to the other say 52/48, the allele at 48% has a higher chance of extinction where the one at 52% has a higher chance of fixation from then on.  Although you would think that, since the alleles are ‘neutral’, this would have no affect.  But, in the future, one of those alleles could protect against a certain disease while the other might not, and if the one that protects against said disease goes extinct, then that species could be doomed.

Even if seed banks take a few samples of certain species, they would still suffer at the hands of genetic drift similar to situations regarding Genetic bottlenecking. This is due to the fact that if you have a reduced gene pool genetic drift has a higher effect. “…in small populations (e.g. < 100 individuals), allele frequencies may undergo large and unpredictable fluctuations due to [genetic] drift (9, 31).” (Ellstrand 219) On top of bottlenecking there are problems with sampling error: “The effects of sampling on genetic variation do not cease after a sample of seeds has been collected in the field… few have discussed the realization that levels of genetic variation in a seed bank are heavily dependent on the rate at which variation is lost when seeds are stored.” (Hamilton 41) Here, Hamilton describes the fact that variation continues and, that one main reason why seeds are stored in the first place, is because their species are in danger of losing diversity.  So, if the diversity necessary for the future survival of plants is already lost, is the point moot?

Apart from all the problems presented, I still feel that the seed bank is a good idea because preservation of diversity at any level is a good thing. Although there are some flaws that come with it, knowing these flaws allows us to overcome them. Plants are sessile, meaning they can’t move, so they need someone to protect them. That job falls on us.  And, as we are the main reason why they need to be protected in the first place, it may be both, the least we can do for them as we consider that we need them to survive and they need us to preserve their vast diversity to live.

Posted by BenGeller at 9:46 AM