The Orystolagus cuniculus, or the European Rabbit, is just one example of the detrimental effects that invasive species can have on their environment. An invasive species is a species that is introduced into an environment where it is not native. These species can upset an already established ecosystem, harm natural resources and threaten the ability of humans to use these resources.
Native to the Iberian Peninsula, the European Rabbit was first introduced to Australia in 1788, and eventually released into the wild in 1859. A population that started as a group of 24 rabbits released for hunting purposes quickly multiplied, reaching a population of about 10 billion by the 1920’s (5). They are now found almost everywhere across the continent. This species of wild rabbit is still plaguing Australia years after their first introduction. 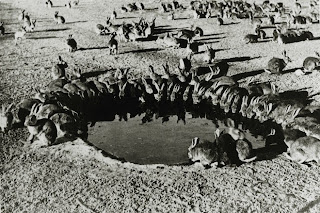 These animals have become such a nuisance that there are organizations devoted to eradicating the species from the continent, and the government provides resources to educate its citizens of the problem. Shown above left is a pamphlet that is distributed by the Australian government’s Bureau of Rural Sciences to land owners. It provides information on how to recognize and assess a rabbit infestation as well as what measures should be taken (4). These pamphlets teach awareness on how large a threat these small creatures can be.


What is it that makes these seemingly harmless creatures so dangerous? In a risk assessment done by the Australian government, and the Invasive Species Specialist Group, the European Rabbit is noted to cause habitat degradation and have negative effects on local agriculture (3). These rabbits feed on plant life to the point that they prevent regeneration, and native vegetation cannot be sustained (4). Even a population with low density can prevent regeneration, leading to soil erosion.  In some cases they have turned land into semi-desert. 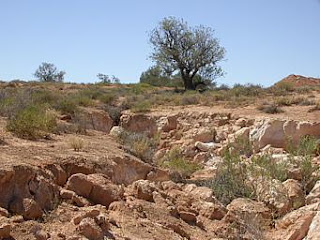 The picture to the left shows the erosion caused by rabbits in a gully in southern Australia. Their destruction of vegetation, along with increased competition for food and shelter, has caused a decrease in populations of similar-sized native creatures (2). They often steal burrows of native burrowing animals such as the Bilbies, and their burrows have negatively impacted populations of seabirds and sea lions (3). Rabbit burrows become death traps for sea lion pups and disturb the underground nests of certain sea birds (3).  They sustain populations of exotic predators such as feral cats and foxes, increasing predation on native species while not having a severe impact on the rabbit population (4). Population control for these animals is extremely difficult due to the rapid rate that they reproduce. In only a year and a half, one pair of rabbits can multiply into 184 individuals. The picture to the left demonstrates just how large the populations can become and the amount of destruction they have on their environment. The introduction of this rabbit has led to a number of native mammals, and plant species, to become endangered or extinct.


There have been numerous efforts to eliminate the rabbit population from Australia, but none have been entirely successful. Conventional methods, such as using poison and fire to destroy burrows, are costly and have proven ineffective due to the rate of reproduction (5). Rabbit fences have also been constructed in attempt at protecting pastoral and agricultural lands. The most effective methods at containing rabbit populations have been biological, however even these have had their problems. Two different viruses have been introduced to the rabbits in hopes of eliminating the population. The first was the myxomatosis virus that was released in 1950. It causes skin tumors to form and can lead to a number of other problems such as secondary bacterial infections. The introduction of the virus was at first successful and led to a large decrease in population size, but this did not last. The rabbits began to develop a resistance to the virus and numbers began to increase again (2). The Rabbit Haemorrhagic Disease virus, known as RHD, was introduced in 1995. This virus was more effective than myxomatosis, but again a resistance to the virus is being built (1). Currently there are multiple research programs in progress looking for new and more effective ways of keeping the rabbit population in check. 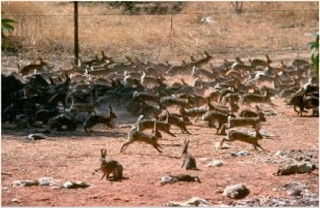 As the rabbit has negatively impacted the environment, it has also had negative repercussions for Australia’s economy. It is difficult to estimate just how much the introduction of the European Rabbit has cost the Australian government or what the total economic loss has been. Population control is expensive, especially since rabbits seem to reproduce faster than you can kill them. An estimated twenty-five million dollars is spent annually on rabbit management by landowners, and the government in an attempt to keep the numbers in check. The European Rabbits negative impact on the environment proves costly towards primary production. It was estimated that in 2004 the rabbits cost primary production $113 million in production lost and control costs (4).  However the introduction of RHD into the populations has provided some benefits, and has increased production of meat and wool.  It is difficult to put a monetary value on how much the rabbit has cost the Australian government so far in economic loss as well as the loss of valuable species of plants and animals and land destruction.
The Australian government is aiming to eventually become “Rabbit-Free”. An event that is difficult to picture given the still large population numbers. In order for a Rabbit-Free Australia to be possible, population control methods are going to have to be increased and ways found to make them more effective. Biological methods do not seem to prove to be an effective long-term solution, especially since the rabbit populations have developed resistance to both viruses that have been introduced in hopes of wiping out the species. New and different viruses would have to keep being introduced and this could have disastrous results. Once introduced, the spread of disease cannot be controlled. The biggest problem is that the European Rabbit populations have been shown to bounce back quickly from distress without significant damage. Even in declining populations control methods cannot be relaxed as the numbers could easily begin to increase again. Eradication measures, in order to be effective, need to be organized and persistent. All in all, a Rabbit-Free Australia does not seem likely.