The emergence of infectious diseases due to biodiversity loss.

The emergence of infectious diseases due to biodiversity loss.

Life as we know is it is changing. Most people accept this as a simple fact of evolution. Change can be good and bad, but the loss of biodiversity is a change we cannot just merely accept. The US Congressional Biodiversity Act of 1990 describes biodiversity as “the full range of variety and variability within and among living organisms and the ecological complexes in which they occur, and encompasses ecosystem or community diversity, species diversity, and genetic diversity” [12]. The rich biodiversity that once was, is now declining rapidly. Human actions are largely responsible for the destruction of ecosystems, loss of species, and overall genetic variability. The leading threats to biodiversity include conversion of land to agriculture, deforestation, climate change, pollution, unsustainable harvesting of natural resources and the introduction of invasion species [11]. What many people may not realize is that their relationship with the environment intrinsically connected with their own health.
The loss of biodiversity has indirect and direct effects on provisioning and regulating ecosystem services that benefit humans. To elaborate, biodiversity serves to provide regulating ecosystems such a climate regulation and disease control. The result of these services being at risk is making it increasingly more evident that biodiversity is at the core of human health [5]. A rich ecosystem prevents disease by providing provisioning ecosystem services such as clean water, nutritious food and traditional medicines. Essentially, biodiversity is the backbone of a happy and healthy world. But, now the decline in biodiversity is coinciding with an increase in a sick environment and population. This coincidence has led researchers to speculate whether the decline in biodiversity is a key factor in the rise of emerging infectious diseases (EID).
The relationship between EIDs and loss of biodiversity is evident in the core neglected tropical diseases that are affecting the people of Africa, Asia, and South America. In the past decade, there has been a surge in the number of EIDs that have plagued people and animals. For example, Schistosomiasis (Snail fever), is a trematode EID that infects people when they come in contact with fresh bodies of water that are inhabited by infected snails (intermediate host) and the parasitic trematode, Schistosoma mansoi. Approximately, 200 million people currently infected worldwide with about 80% of transmission occurring in sub-Saharan Africa [2].  The emergence of this disease can concurred with a change in the environmental stability of sub- Saharan Africa. Sub-Saharan Africa is made up of a rich diversity of biomes consisting of savannas, tropical rainforests and grasslands. It also has a wide distribution of biomass and very high population density. This rich diversity is at risk and is declining due to habitat loss, pollutions, wildlife trade, and invasive species [9].
The decline in biodiversity has directly affected Schistosomiasis and many other parasitic diseases that rely on a host and vector relationship, see figure one [1]. This means the abundance of the host or vector is changing, which in turn affects the behavior and condition of the host, vector or parasite [3]. The relationship between population density of a host such as
snail in Schistosomiasis and the rate of infection was measured experimentally. By comparing infection rates between a single host population and a host in a dense population sample, researchers concluded the presence of another species could reduce the transmission of parasites even if the total density of the parasite is constant [1]. This dependent relationship indicates that breaking the natural balance of species to species interactions can be fatal.

It is essential to consider why we are seeing a loss of species and population density in order to understand what the consequences are and how we can stop the devastation. Recent EIDs seems to be driven by globalization and ecological disruptions [6]. Man’s power to alter landscapes has caused the degradation of ecosystem services and the functions they provide. For example, deforestation is a major cause of habitat and biodiversity loss. Deforestation is the removal trees so the land can be converted to a “non-forest use” [7].  Not only has deforestation adversely affected carbon dioxide sequestration and subsequently global warming, but it has also increased transmission of Malaria. 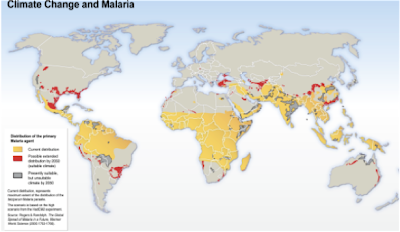 Malaria is an infectious disease that is transmitted to humans through Anopheles mosquito that carry the malarial parasite, Plasmodium. According to WHO 2007, there are at least 300 million cases of Malaria per year and at least 1 million deaths [3]. The clearing of trees allows the Anopheles mosquito's' to breed more because they have more access to surface-water. Deforestation’s global warming effect also causes warmer microclimates so the larval mosquitoes survival rates have increased. The availability of direct sunlight, rising water temperatures and a shift in community dynamics has enabled this survival rate. The mosquitoes have also adapted the ability to digest blood meals at a faster rate. All of this has allowed the malarial parasite to develop quicker, which makes the mosquito infectious at a faster rate in warmer temperatures [6].  According to the CDC, the mean biting rate in areas with over 80% deforestation was 8.33 compared with 0.03 per night that was calculated for areas that only have 30% deforestation [4]. This incidence is a clear-cut example that the human population needs a rich biodiversity for their health protection. The relationship humans’ hold with environment is cyclical. Human actions effect the environment and in turn the environment affects the well-being of humans.

By exploring the shift in EIDs and biodiversity, the evidence is clear without biodiversity plants, animals, and humans cannot live in a healthy world. So how can we stop the decline before we reach the tipping point of no return? In the TED talk, How Poachers Became Caretakers, John Kasaona suggested model that balanced traditionally cultural practices with modern technology to reach forwards conversation. His model is focused on community-based conservation so that radical movements such as deforestation and poaching can be reduced. Kasaona left the audience with these powerful words, “We knew conservation would fail if it doesn't work to improve the lives of the local communities” [8]. To change biodiversity patterns the approach needs to be a local level that can be sustainable for everyday practices and collectively a global change can occur.