In the past century, people have become increasingly inclined to move from rural areas to cities. According to 2010 data from the United Nations, more than 50% of the population lived in urban areas by 2009, and it is estimated that in Europe alone, by 2020, 80% of the population will be living in urban areas (5). Moreover, humans are building the equivalent of a city the size of Vancouver, BC every week (2). While this urban growth is necessary to supply housing for many families that are transitioning to living in cities, it has also been shown to cause very detrimental effects on biodiversity. Urban regions have been shown to have less native species, larger amounts of disturbed habitats in early successional stages, and altered ecosystem functionality compared to natural ecosystems (5). Urbanization has also been known to disrupt species richness of many different species. Due to this, it is important that biodiversity become integrated into urban planning to reverse or minimize the detrimental effects that cities currently produce. Both developers and the public must be engaged in order to achieve the conservation of urban biodiversity (6).

In order to show the decrease in biodiversity due to urbanization, a study conducted by Miller et al demonstrates the ways that native species of birds are affected by nearby development was addressed by examining patterns of habitat use by birds during their breeding season (7). 16 different sites were used, representing an urban-to-rural gradient, as shown in Figure 1 below. 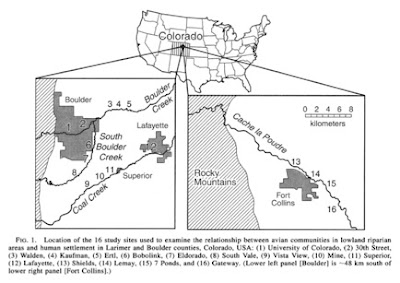 The 16 different areas were then given values of urbanization, as seen in Figure 2, with University of Colorado (Boulder) having the highest urbanization index and Vista View having the least. 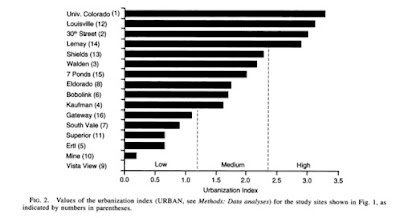 Their data also suggested that as development increased, woodlands tended to have fewer native trees and shrubs, less ground and shrub cover, higher tree densities, and greater canopy closure, as seen in Figure 3. Moreover, there was a negative relationship between the overall levels of urbanization and bird species richness (p = 0.008) (8). That is, as the urbanization index increased, the bird species richness significantly decreased. Another way that urbanization affects the biodiversity is from invasive species. Built lots and neighborhoods are often full of exotic plants that can adversely impact the native plants and animals in these areas (6). The loss of species richness and loss of native species are just a couple of examples that show how urbanization can adversely affect the ecosystem that surrounds it and the species that live in that ecosystem. 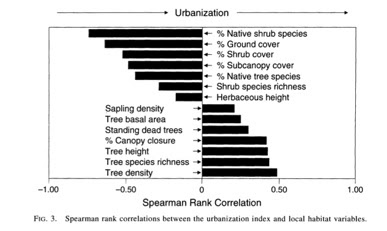 So, now that we know that urban growth definitely has negative consequences on biodiversity, what can be done to protect the remaining biodiversity in cities? First, we need to educate the public on this important issue. Studies have shown that many homeowners don’t understand how individual actions affect conserved natural areas (6). One project called MEMO (Mass Extinction Monitoring Observatory) has been created to raise awareness and understanding of the issue of biodiversity. This project will be located on the Isle of Portland in Britain and will be a limestone monument of the world’s extinct species combined with a biodiversity education center (1). It’s stone will have carved images of the 860 species that have become extinct since the dodo. Even the architecture of this structure will provide many educational opportunities! For example, people can learn about biodiversity from the lichens that will grow on the structure as well as limestone deposition in the global carbon cycle (1). Moreover, it is suggested that governments play a role in education of biodiversity for the residents by funding the creation of environmental education programs (6). Once residents learn about the threats that urbanization can have on biodiversity, they will hopefully feel more encouraged to take the initiative to prevent these harmful effects in their communities.

On top of engaging the public in this issue, it has also been suggested that governments should be required to empower change and innovation among urban planners and builders. Many proactive site planning and design practices, at neighborhood and site scale, include biodiversity conservation as an essential program objective (4). Some evidence even suggests that personal exposure to natural things every day is a major determinant of sensitivity to environmental issues (8)! This information shows us that adding biodiversity in urban cities can not only help the species that have lost their homes due to this urbanization, but it may also help people begin to care more about the environment and biodiversity issues that surround them. One great example of this urban planning to promote biodiversity is the green roof on top of the convention center in Vancouver, British Colombia (This roof is 6-acres and has been modeled after a native coastal grassland ecosystem so that it can respond to the extremes in growing medium depth, water availability in the summer, and micro-climate that the roof plants will be exposed to (4).

Another new, not to mention pretty innovative, idea that has been put forward to contribute to regeneration of the environment and urban biodiversity is vertical forests! Right now, the two towers of the Bosco Vertical (Vertical Forest) are under construction in Milan, Italy, which will each hold 480 big or medium sized trees, 250 small trees, 5,000 shrubs and 11,000 ground-cover plants (3). The architects calculate that the trees are equal to 2.5 acres of ground-type-forest and say that the project uses this vegetation to absorb dust and carbon dioxide, to produce oxygen, and to shield residents from acoustic pollution (3).


With all of the damage that humans have done to their environment and ecosystems by building cities, the least we can do now is to try and think of new ways to accommodate for the biodiversity that we have now so that we don’t produce more damage, right?  From just raising awareness with the MEMO project to creating “vertical forests” that not only regenerates biodiversity, but also plays a role in cleaning the environment around it, urban planners are beginning to think of innovative ways to slow and alleviate the effects that have occurred and are still occurring due to the construction of cities.

Posted by Clarissa Camarillo at 10:10 PM