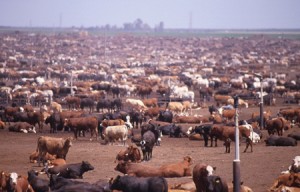 The current modern agriculture practices are decreasing the amount of biodiversity in the areas surrounding agricultural activity. Modern agriculture demands an immensely large amount of land and resources (Woodhouse et al).  It is predicted that by 2050 we are supposed to reach 9 billion people in the world (Tassel et al). The demand for agricultural space and production is going to increase.   That being said, the way our current agricultural system is functioning is leading to biodiversity loss at a dramatic rate.  New practices and ideas such as vertical farming and sustainable farming techniques offer potential solutions to the growing harmful effects from industrial agriculture.
dramatically.

Biodiversity affects us in almost all aspects of our lives.  Increased biodiversity in an ecosystem leads to increased ecosystem services that can be obtained from that ecosystem, and therefore yield greater benefits to humans.  With increased bio diversity you have greater crop yield, less pest/disease problems, more beauty, more resources, food, and medicine.  There are numerous benefits from greater biodiversity on humans (Diaz et al).  The decrease in biodiversity from human actions through things such as climate change, from fossil fuel emissions is detrimental. In a New York Times article “The world under our feet” author Jim Robbins addresses the importance of diversity on soil and how soil affects a lot of ecosystem services. Robbins acknowledges that bio diversity is decreasing, with the predicted 6th great extinction occurring by 2100. Robbins elaborates that microbial diversity is a good indicator of how overall biodiversity is since so many ecosystem services rely on rich soil diversity.

Microorganisms account for a large majority of species that exist on the planet. Tropical rain forests comprise around 7% of the earths land surface, but account for around 60% of all known plant and animal species. In Rodrigues et al microbial diversity is examined in areas of the Amazonian rain forest that has been converted into agricultural land, specifically focusing on land that has been 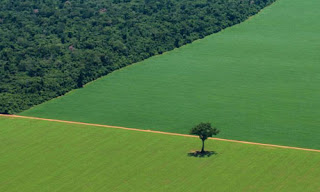 converted for pasture use.  Overall this land use conversion has caused the decrease of plant and animal species diversity as well as the homogenization between different areas (Rodrigues et al).  Homogenization means that the species that are present in two areas that are separate are almost identical, which leads to an overall species diversity decrease. The microbial community of two different pasturelands and the surrounding forest areas were studied.  In these land areas microbes comprise most of the species and also provide very important ecosystem functions, so the researchers rationalized that observing how the microbial diversity is affected by the land use change is a good way to estimate overall the diversity change.

Stated above was an example of how agriculture is a threat to biodiversity loss.  As important as it is to focus on all the bad agriculture is doing, I think that it is also important to research and discover new ways that the current agricultural practices can be reformed. Two very promising ideas that have arisen in the past decade are vertical farming, and sustainable farming techniques.

Vertical farming is an idea that incorporates farming into the urban landscape.   The vertical farm will be situated in urban areas in tall buildings; each floor will be a different crop.  This will allow urban centers to grow their own food in their own city, with sustainable production and year-round crop production.  The buildings will be environmentally controlled, sort of like stackable greenhouses.  The main reasoning behind the vertical farming project is the need for more agricultural land as the population increases.  The website Theverticalfarmproject.com which was started by Dickson Despommier cites vertical farming as the solution for the coming food shortage.  Vertical farming will eliminate agricultural run off that normally contains harmful substances that affect biodiversity by recycling that water to be used in the farms.  Fossil fuel generation will be greatly decreased using this technique because the crops will not have to be shipped far, tractors, plows, and other farming tools that emit fossil fuels will not need to be used.  Vertical farming will also not use herbicides, pesticides, or fertilizers that contain harmful substances to humans and biodiversity.  The major potential problem with vertical farming seems to be the actual amount of food production that can be made from these buildings.  Will enough food be created to actually feed an entire city? The other problem that could potentially be an issue is the amount of energy that is required to power these large buildings. Although vertical farming presents an innovative way to avoid harming biodiversity more, converting current farming techniques to more sustainable techniques could also help decrease biodiversity harm.

Sustainable agriculture according to www.sustainabletable.org is “the production of food, fiber or other plant or animal products using farming techniques that protect the environment, public health, human communities and animal welfare”. Its essentially conscious production, looking at how techniques that are used for agriculture are affecting people and the environment and creating ways to still produce the same amount of goods, but in a way that will allow future generations to farm and live.  The sustainable techniques work with the environment, and protecting biodiversity is one of their main goals. Multi-cropping is one technique that sustainable farmers use, it plants multiple species on one piece of land.  Sustainable farming also does crop rotation, changing what is planted in a particular location from season to season and intercropping, which is the planting of two or more crops with different characteristics in close proximity to reduce weeds and encourage plant diversity (Horrigan et al).  Multi-cropping is supposed to enhance crop yields, biodiversity, and decrease pest susceptibility.  Another key feature of sustainable agriculture is the little to no use of pesticides.   A way to avoid pesticide problems is the use of “beneficial insects and organisms”.  These organisms target pests that typically harm crops and include ladybugs, as well as nematodes. 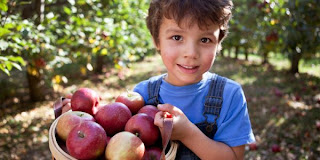 Although agriculture is decreasing biodiversity and greatly affecting the environments surrounding them there are ways to combat the destruction and find ways to make sure all people are fed. Ideas such as vertical farming present an innovative way to decrease the amount of land that is being destroyed and the biodiversity along with it, as well as promising ideas to only use a small amount of resources.  Sustainable agriculture presents ideas that will not necessarily decrease the amount of land that is used for agriculture but change the way the land is used to preserve the surrounding environments.  Through innovation and cooperation biodiversity can be saved from the current industrial agriculture practices.