Fungi, Frogs, and the Future of Amphibia

Fungi, Frogs, and the Future of Amphibia 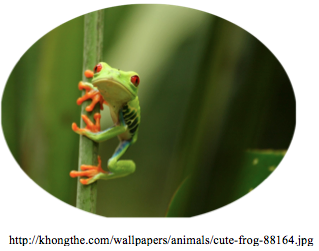 In our lifetimes, a significant proportion of amphibian species will cease to exist on this planet.  A global crisis is underway, as amphibians begin to disappear at an alarming rate.  Over the last few decades, the significance of this decline has become increasingly recognized both in academia and in popular media.  However, only recently has the scope of the crisis been quantitatively analyzed.  Using data collected by the U.S. Geological Survey Amphibian Research and Monitoring Initiative (ARMI), Adams et al. (2013) determined the rate of change in the likelihood that members of a given amphibian species could be found at designated sites, a measure referred to as occupancy probability estimates [1].  The results were grim; on average, the probability of encountering amphibians in their natural habitat is decreasing an astounding 3.7% a year.  Even for the species considered relatively safe (those listed in the “least concern” category of the IUCN red list) are experiencing an annual decline of 2.7 %.  Although the study conducted by Adams et al. was performed over a relatively short span of time in a limited number of sites, the trend is alarming, to say the least.  This decline is due to a number of factors.  In particular, global climate change, an epidemic of chytridiomycosis, the introduction of invasive species, and habitat loss and degradation are driving amphibians to extinction at a startling pace.  Furthermore, these threats tend to exacerbate the impacts of the others.  While the loss of biodiversity is in itself a tragic prospect, amphibians offer us an incredibly value ecosystem service.  Secreted in the skin of amphibians are proteins capable of destroying anything from cancer cells to HIV virions.  These amphibian antimicrobial peptides present enormous potential for biomedical research.  Clearly, there is an ethical, economical, and scientific imperative to understand and counter this crisis before our generation witnesses the irreversible loss of an immensely important class of organisms.

The deadly fungus B. dendrobatidis 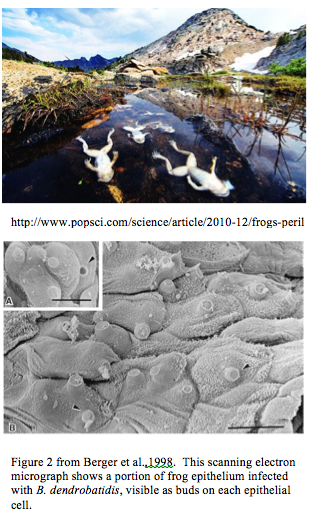 The amphibian crisis can be attributed in large part to a global outbreak of a deadly fungus called Batrachochytrium dendrobatidis.  In recent decades, the presence of B. dendrobatidis has been found to correlate with massive mortality events in wild amphibian populations.  In fact, B. dendrobatidis has been identified as a contributor to the decline of at least 200 species of amphibian [2].  A study by Olson et al. (2013) isolated the fungus in 42% of the amphibian species they tested, and in 52 out of 82 surveyed countries [3]. The epidemic is spreading, as well; B. dendrobatidis was recently found for the first time in caecilians.  The symptoms of chytridiomycosis include the death of epithelial cells, as the fungus degrades the keratin in the frog’s skin [4].  As the cells of the skin die, the amphibian becomes unable to properly regulate the flow of water, oxygen, and electrolytes across its skins, and eventually succumbs to heart failure [5].
It is not fully understood why B. dendrobatidis has suddenly become such a virulent and deadly pathogen.  The dramatic declines in wild amphibian populations are relatively recent, despite the fact that the fungus has been present in amphibian populations for decades [2].  In fact, scientists have debated whether the chytridiomycosis epidemic represents an unprecedented spread of B. dendrobatidis into many habitats, or if the fungus was already present in many ecosystems, and climate change-associated environmental shifts have made amphibians more susceptible to disease.  The ultimate explanation is likely a combination.  Although amphibians have some natural defenses against the pathogenic effects of B. dendrobatidis, they are also especially sensitive to shifts in temperature and precipitation patterns.  Environmental shifts could theoretically have resulted in immunosuppression that permits B. dendrobatidis pathogenicity.  For example, it was found that in the Silurana tropicalis frog, the expression of genes related to immune responses is actually temperature dependent [2].   B. dendrobatidis is commonly believed to have originated in Africa, as a symbionts of the African clawed frog Zenopus laevis [6].  The earliest recorded case of chytridiomycosis was seen in 1938 in the Xenopus.  Furthermore, the popularity of these frogs as model organisms for research lead to a substantial international trade in the species, which could explain the currently observed global prevalence of the deadly fungus. 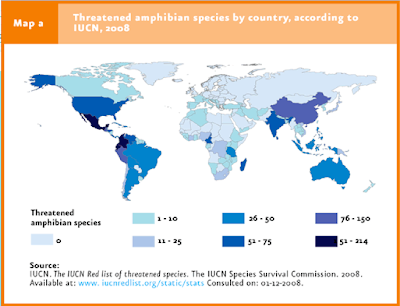 Amphibian epithelial tissue is responsible for the continual exchange of material with the external environment, and it is accordingly exceptionally permeable to toxins and pathogens.  Consequently, amphibians have evolved a sophisticated repertoire of antimicrobial peptides to support their immune systems.  In fact, several of these proteins have been found to have activity against B. dendrobatidis [10].  Although the scientific value of amphibians has become increasingly recognized in recent decades, their medicinal utility has been known of for quite some time in many indigenous cultures.  The Katukina tribe of the Amazon, for example, has used skin secretions from particular frog species for generations, to treat everything from laziness to cardiovascular issues.  Currently, researchers and corporations around the globe are turning to amphibians for the source of valuable compounds; Demorphines act as painkillers 33% more effective than morphine, and Magainins A and G have spermicidal properties [7].  Perhaps the most intriguing compounds derived from amphibians are those that exhibit anti-HIV activity.  In 2002, Lai et al. isolated several new antimicrobial peptides from the skin secretions of the Chinese red belly toad, Bombina maxima.  One of these proteins, dubbed Maximin 3, destroys HIV virus particles and exhibits only minor toxicity towards human cells.  In order for such proteins to become medically useful, however, they must be modified and synthesized in a laboratory setting.  The peptide Dermaseptin S4, isolated from the South American arboreal frog Phyllomedusa sauvagii, showed selective toxicity towards HIV particles [8].  Further study revealed that this protein is capable of forming a pore that punctures the cellular membrane of the virions.  The targeted action of Dermaseptin S4 against HIV even in the presence of human cells is attributed to subtle differences in the lipid composition and electrical properties of the viral membrane.  This selectively can even be enhanced with slight modifications to the protein [9].  A form of DS4 was modified to substitute a methionine for a lysine residue to increase the positive charge.  With this Dermaseptin (DK4-S4), concentrations of around 3.5 – 5 μM were sufficient to reduce HIV infection by about 90% without significant toxicity against human cells [8].

The fate of amphibians

The scope and severity of this crisis is becoming more evident everyday.  As amphibian species disappear from around the planet, their plight seems to increasingly represent the tragic limits of our understanding of the natural world.  Our impact on ecosystems has brought these fascinating creatures to the brink of extinction, just as we come to realize their incredible potential and beauty.  The solution to this crisis must be found soon, before it’s too late.  A multitude of studies are currently being conducted that aim to investigate possible strategies to counter the spread of chytrid fungus.  Some of the proposed methods include immunizations of amphibians to improve the resistance of wild populations against the fungal pathogen, repopulating habitat with captive-bred individuals, and even treating natural habitat such as ponds with a fungicide (Woodhams et al., 2011).  Ultimately, a combination of approaches will be necessary to save the amphibians, and in any case, the first step is the protection of natural habitat.

Posted by Alex Whitebirch at 1:49 AM