Colony collapse disorder is the name of a phenomenon describing massive bee colony die offs. More than one third of the honeybee colonies in the US perished during the winter of 2007, and more than a third of those died off in 2008 (http://www.ted.com/talks/dennis_vanengelsdorp_a_plea_for_bees.html). This ongoing disaster has been attributed to habitat loss, climate change, monoculturing, Varroa mites (the viruses and fungi they spread) (http://www.ted.com/talks/noah_wilson_rich_every_city_needs_healthy_honey_bees.html), it has also been attributed to a new class of pesticides called neonicotinoids (or neonics).
Neonicotinoids (related to nicotine) were developed in the 1980’s as a neuro-disruptor of insects, chosen due to their low impact on mammals. Neonics bind to insects acetylcholine receptor in the central and peripheral nervous system, and inhibit neural activity throughout the body (Tjeerd). Neonicotinoids are used against pest insects in the timber industry, and in many commercial crops, including cotton, cereals, legumes, grain, potatoes, pome fruits, rice and many other vegetables. Before planting, neonics are applied to seeds, where they are taken up into vascular tissue and later expressed in pollen and nectar. They are water soluble and can persist in the ground for several years. Neonics were cleared for sale in the US in the mid-2000s, a few years before bee colonies began to collapse in sizeable numbers (Mercola).
Countless studies have exposed the negative effect neonicotinoids have on bee colonies. Low doses of thiamethoxam, a commonly used neonic, while non-lethal to honeybees, dramatically reduces their homing abilities, making it difficult for bees to find food sources and return to the colony. Even a small decrease in foraging ability leads to reduced energy profit in a bee colony. When a colony is not bringing in enough food, it will not grow to an adequate size to reproduce and it could begin to shrink and eventually collapse (Henry). The effect of  imidacloprid, another neonic, proved to have similar negative impacts on a species of bumble bee (Bombus terrestris). Treated colonies grew significantly slower, and produced 85% less queens than control colonies (Whitehorn).
In April, a major move was made against neonicotinoids when the European Union voted to ban three popular pesticides, clothianidin, imidacloprid and thiametoxam. 15 of the 27 EU member states voted in favor of a two year ban, finding a great deal of resistance from Bayer lobbying groups, and the British parliament. “Based on the body of evidence, we can see that it is absolutely correct to take a precautionary approach and ban these chemicals,” Jacqueline McGlade (EEA Executive Director) announced after the decision (Mercola). This decision is only the beginning of what will be an ongoing debate in Europe. The ban only eliminates 3 of the 7 available neonics, and only prohibits usage on crops attractive to bees, such as sunflowers and kale.  While many believe this will not be enough, the ban does not take into account all the other affected organisms, such as aquatic insects and birds. Those against the ban believe there is a lack of scientific evidence (or “bad science”) and this rash precautionary decision will sink already struggling farmers. A statement released by German company Bayer, the leading producer of neonics, expressed disappointment at being scapegoated, stating that people would rather blame big business then look at the real culprits, Varroa mites and viruses. Bayer Cropscience claims that they will continue work to help farmers grow “high quality food” for Europe (Bayer).
The European ban on neonicotinoids leaves many people wondering why they are not being banned in the US as well. In a recent report, the Department of Agriculture and the EPA stated that colony collapse disorder is a complex issue arising from a combination of stressors, and that pesticides are likely only a minor contributor. The stance in the US has been that evidence is lacking to prove that neonicotinoids are a major contributor to colony collapse, to give these pesticides the benefit of the doubt, innocent until proven guilty. Is this a wise stance to take?
If bees in the US began to disappear within years of neonic use, and multiple studies point towards decreased colony health in the presence of these pesticides, should we just wait and see what happens? What would become of farmers in the US if these pesticides were banned? How does this compare the consequences of honey and bumble bee extinction? One fear is that the pesticides that replace neonics will be even more harmful, maybe not to bees, but perhaps to humans, or organisms important to our survival (Jolly). One underlying problem is that pesticides are never 100% specific to the target species. However, we have built an agricultural system that depends on pesticides to ward of massive infestations. We are moving into a time when crop efficiency is increasingly important to feed the growing population, and we will need intelligent ways of dealing with pests if we don’t want to degrade the ecosystems which surround us. Europe has made a bold move in an attempt to curb the damage we are doing to our pollinating symbionts. If the US is not going to ban neonicotinoids, we need to make decisive moves against the factors we believe are most harming the bees. 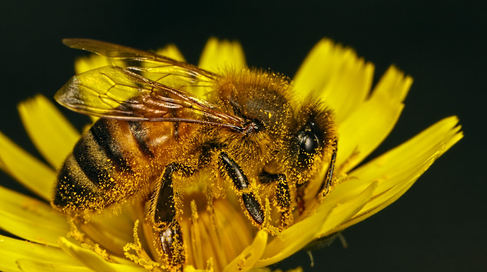