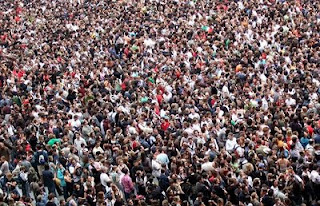 Since the beginning of the industrial revolution the human population has been growing at an alarming rate. The human population has been growing exponentially along the same guidelines as any other species with all of their food and shelter needs met. In fact our population growth can be calculated using the same exponential growth models used to estimate unhindered bacterial growth, with the only difference being the time scale for reproduction. On the other hand the Population Reference Bureau explains how our population has not been growing linearly as many once thought but instead it is growing “arithmetically” meaning instead of doubling in a set amount of time repeatedly, it doubled the first time, quadrupled the second, scaled by 8 the third, and so on, (1). While the exact model of our exponential growth is somewhat debated and unclear, the impact of this growth is not. Life requires resources and every individual of the current 7.1 billion human population needs at least food and shelter. The drive for the basic necessities pushes us to consume and alter much of the natural ecosystems that once thrived in a perfect balance before the human population explosion of the last few centuries. We are now exploiting these ecosystems for all they’re worth and converting them to agricultural and industrial regions that no longer resemble the lushes green landscape Earth had been able to support for hundreds of millions of years. 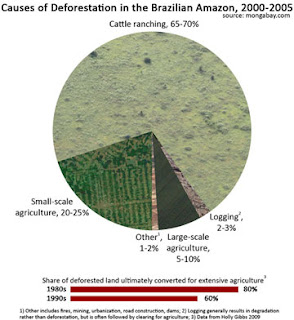 Agriculture is at the heart of current deforestation problems with a high percentage due to cattle ranching. In the graph above you can see a breakdown of the percentage contribution of various human activities leading to deforestation in the Brazilian Amazon. It is interesting that the activities for providing shelter, like logging, represent such a small percentage of the deforestation. Even small and large scale agriculture combined doesn’t come close to the huge impact of cattle ranching. According to the Netherlands Environmental Assessment Agency (NEAA) livestock is responsible for roughly 80% of global land use for agriculture. Beyond that the NEAA found that through land use and nitrogen emission from cattle, livestock is responsible for as much as 30% of global biodiversity loss. This seemed surprising at first but really shows the substantial difference in efficiency of eating plants, the primary producers, compared to eating the primary consumers, cattle. Consumers use a significant percentage of the food energy they eat for maintaining their body functions which is not available as energy for the next and higher trophic levels. Studies have shown that meat-based diets require much more energy, land, and water resources than a vegetarian diet of the same calorie content, (7). This shows some promise for being able to increase the efficiency of agriculture and food supply around the world to support our population if we switch to eating more primary producers and fewer cattle. However, if we can’t manage to increase our agriculture efficiency we will see more and more ecosystems destroyed to support our growing population. 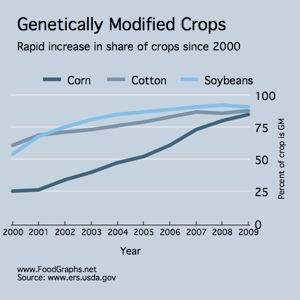 We are facing an exponentially growing population that has passed the level of natural sustainability more than 3 times over. It is estimated that Earth can naturally sustain about 2 billion humans at a European standard of living, (4). With such an extreme gap between our current population and what we estimate the Earth can support sustainably we have been forced to turn to unnatural means of food production including genetically modified organisms or GM foods. As you can see in the chart above in just the last decade the percentage of staple food products like corn and soybean that are genetically modified has increased substantially reaching 80-90%. This is true of other food products as well like canola and potatoes reaching 74%, (5). While GM foods have increased the efficiency of producing primary foods and allowed us to support an ever growing population there are many controversies and environmental issues surrounding these foods. The science of genetic manipulation is still in its infancy compared to other fields which leads many to question if we can understand the possible negative effects of GM foods before it is too late.
While developing more efficient methods of agriculture and reducing the impact of cattle farming by eating less meat may help prevent further deforestation and subsequent biodiversity loss, we need to look to the root of the problem. Decreasing the impact of our actions is only part of the solution; the other part needs to come from managing our population growth. Policies made by governments on the number of children that couples are allowed to birth have proved successful but very unpopular and sometimes inhumane. For example China’s one child policy and other encouraging incentives successfully reduced the fertility rate from 2.9 in 1979 to 1.7 by 1995 where it leveled and very slowly declined to the present 1.6. It has been estimated that some 300 million births were prevented which allowed for a higher quality of life for the current population, (3). While this approach to population control was successful it has been controversial as well, with reports of inhumane actions to having additional children. Other countries have been successful in reducing their population growth without strict rules. Iran instituted mandatory contraceptive courses for couples applying for a marriage license which has resulted in smaller family sizes. The United States has been able to follow a similar reduction in fertility rates as China, 2.49 in 1970 to 1.89 current, with the help of Title X of the Public Health Service Act in 1970. This act set aside funds for reproductive education and contraceptive programs which significantly reduced the number of unplanned pregnancies, (8). With a similar reduction in fertility rates between more extreme methods and conservative approaches there is hope for preventing further growth through education and making contraceptives available to the public.
Our growing population is forcing us to alter the planet more and more to survive. While we consider issues of deforestation, climate change, and biodiversity loss every day we need to realize the unsustainable population is the root of almost all of these problems and they will only continue to get worse if we can’t stop it. We have turned to using potentially harmful GM foods and other short term solutions to try to increase efficiency and support our population. This has allowed us to continue surviving past the Earth’s natural sustainable level for human population and allowed many people to continue to ignore the main problem. If we are to save the Earth and the billions of different species that co-exist with us we have to direct our thoughts away from the secondary issues caused by our population and attack the root cause of the problem. The biggest issue is getting people talking about our population problem and realizing our responsibility to change the future for the better. Making education and contraceptives available seems like the most promising conservative and humane method of limited our growth. This method has been shown to work in certain countries and should work on a global scale if we can implement it soon before Earth is irreversibly altered and life as we know it is no longer possible.